Chris Johns: Brexit is distracting us from serious risks to Irish economy 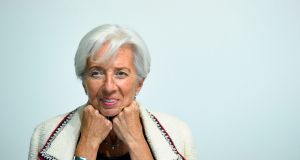 Just how the ECB’s incoming boss, Christine Lagarde, resolves the arguments over what to do about Europe’s under-performing economy will be of far greater significance than Brexit

One of the distortions caused by Brexit is the way it obscures what is happening in the real world. This week, for instance, the US central bank cut interest rates, an event with global economic consequences. Even a few people involved in financial markets probably didn’t notice. Closer to home, Mario Draghi’s retirement as head of the European Central Bank attracted a little more interest but not nearly as much as it should have done: a row at the top of the ECB over monetary policy will affect all of us. Just how the ECB’s incoming boss, Christine Lagarde, resolves the arguments over what to do about Europe’s under-performing economy will be of far greater significance than Brexit.

In the UK, the government postponed both the November budget and the announcement of the successor to the Governor of the Bank of England, Mark Carney. The UK Treasury said this week that the new Governor will be announced after the general election - but Carney is definitely on his way at the end of January. That, of course, is also the next Brexit deadline. These things have a nasty habit of being both messy and missed.

That decision to cancel the budget provoked a warning from the UK’s official fiscal oversight agency that it would take the extraordinary action of publishing its own forecasts for the economy outside the normal budgetary process. We could well catch sight of some (but not all) of these forecasts in the next few days. Given the election they will attract even more attention than usual.

The UK’s fiscal position is deteriorating rapidly. With both Labour and Conservatives competing over how much money to spend, any likely future fiscal deficit grows by the day. But that’s not all: technical adjustments to the public finance data have eliminated much of the supposed £27 billion (€31.25 billion) ‘war chest’ bequeathed by the previous Chancellor. The current incumbent, Sajid Javid, has already promised £13.4 billion of extra public spending which, when combined with new accounting treatment of student loans, means that Hammond’s gift has already completely been used up.

This week saw the UK’s National Institute publish forecasts suggesting that the UK economy will grow at around 1.4 per cent a year for the foreseeable future. That, of course, assumes there will be no Brexit catastrophe. The UK is growing painfully slowly, partly because of Brexit, partly because so is much of the rest of the world, especially Europe.

Growth is higher in the US, but not by much and not by enough to leave the central bank feeling comfortable. As in the UK, the US is generating lots of jobs. Unemployment, as conventionally measured at least, is at a multi-decade low.

This is a puzzle: wages should be accelerating. Either there is more slack in the labour market than captured by the unemployment numbers or something new is going on. The latter could simply be a reflection of the growth of corporate monopoly power. Big companies make big profits partly via suppressing wages. Another event that attracted little attention this week reflects those big company profits: the US stock market hit an all-time high.

A booming stock market and worries over economic growth are tough to reconcile. Part of the explanation lies with low interest rates: the stock market represents the only chance for many savers to make some money. Maybe organisations like the IMF and the Fed are wrong to be worried about the possibility of a global recession. Europe’s stock markets are not at US-style highs but as worries about growth have grown, equity prices have begun to show some signs of life.

The problems caused by the activities of foreign multinationals do make headlines and, if anything, are growing

Figuring out what all of this means domestically is hard. A task not made easy by the distortions present in our economic data. The problems caused by the activities of foreign multinationals do make headlines and, if anything, are growing.

The independent and respected American think tank The Council on Foreign Relations last week published a piece of research with the title ‘Ireland’s Statistical Cry for Help’. Economist Brad Setser suggested that our GDP data is now so extreme - strange - ‘that it almost reads like a plea for a new system of national accounts’.

In the second quarter of the current year, investment hit 60 per cent of GDP. Setser (and others) suspect that it was the activities of the likes of Microsoft, who shifted $50 billion (€44.8 billion) in intellectual property assets to Ireland (from Singapore), that account for this apparent investment surge. Health warnings about Irish GDP data have been around for some time and are still clearly required. Setser concludes that, such are the distortions in tech profits, the proposed OECD BEPS tax reforms don’t go far enough.

Tech and related profits are mostly responsible for America’s surging stock market. They are, in part at least, the flip-side to puzzlingly low wage growth. If your economy doesn’t have many tech companies (much of Europe), you don’t have much growth. Central banks are struggling to deal with this changing economic landscape. Finance ministers want to tax those profits so they can make up for the spending shortfall caused by those too-low wages, thereby taking some of the burden off those central bankers.

How all of this plays out over the next few years will be much more important, even to Ireland, than anything that happens in the UK.

8 Ireland’s economic year: The pain has most definitely not been equally shared