IDA Ireland warns against complacency in week of bad news 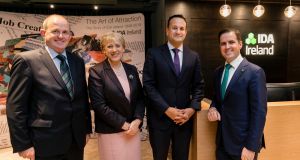 Sometimes even the best planning comes unstuck. IDA Ireland has long been planning a move out of its long-time home on Wilton Place. Any pluses from its location by the Grand Canal were considered by many staff to be more than offset by the tiny corridors and small, almost Soviet era-type offices.

No such problems at nearby Park Place, where the state-of-the-art fit-out is seen as more in keeping with the image of a modern, vibrant economy that Ireland’s inward investment agency wants to portray to its clients – both existing and prospective.

At the formal opening on Thursday, chief executive Martin Shanahan noted that the agency had experienced a series of ups and downs over its 70 years, though “thankfully more of the former than the latter”.

But in a week that has seen a shocking loss of jobs at long-term multinational employers across the State, he spared a thought for workers and communities around Molex’s plant in Shannon and the Ringaskiddy operation of drug giant Novartis.

The IDA would, he said, look to secure new investors for the Shannon site and “work with Novartis as it reshapes its operations in Cork”.

Addressing concerns that multinational employers are likely to cut and run at the first sign of stress, he noted that 60 per cent of Ireland multinational businesses have operated in the State for at least 10 years, with a third of them here for 20 or more years.

Job losses at client companies have been at historic lows in recent years. In 2018 losses amounted to 4 per cent across the 230,000 people employed by multinationals in Ireland, less than a third of the rate a decade ago. Overall in 2018 gross gains in FDI employment was 22,785, spread across all regions of the State, the IDA noted

Still, he warned, there was no room for complacency.

“It is a reminder that we cannot take FDI for granted,” Shanahan said, adding that IDA Ireland had consistently warned that Ireland had to maintain its competitiveness if it wanted to maintain and attract investment.