Business week: Housing back in the spotlight 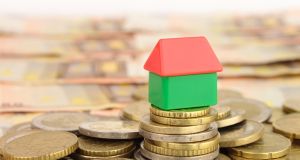 The housing crisis continues to bring joy to some and pain for others. New CSO figures this week show price growth accelerated in June at a rate of 11.6 per cent on an annual basis. The average market price paid by households for a dwelling reached €258,544 outside of Dublin, or €401,890 in the capital.

All of this is good news for KBC Bank Ireland, which on Thursday announced first-half net profit that surged 213 per cent to €166 million, driven by the release of bad-loan provisions on the back of rising house prices.

The State’s largest landlord, Ires Reit, has also benefitted from the crisis. Profits at the group rose 25 per cent to €33.3 million in the first six months of the year on the back of higher rents and a jump in the value of its properties. Ires expects rents to continue to rise in Ireland, which is bad news for employers looking to lure talent to Ireland.

A report from digital technology recruitment firm Prosperity this week indicates that tech professionals are turning down job offers here because of the cost and availability of rental accommodation. It said the number of individuals rejecting jobs in Dublin has doubled as candidates opt to move to cities such as Paris, Berlin and Lisbon.

Bookmaker Paddy Power Betfair has a long track record on being on the right side of the odds, so it came as a shock when it found itself wrong-footed over the bank holiday weekend by reports that a replacement was being lined up for CEO Breon Corcoran.

On Monday the company revealed that Corcoran – the man whose return to the Irish bookmaker was seen as an essential component of the £7 billion merger with Betfair just last year – was in fact stepping down.

Even news that a replacement was already lined up did little for the share price, which has since slumped almost 10 per cent as investors struggle to understand just why the man charged with building a future for the merged group had suddenly decided it was time to move on.

It isn’t just technology firms that are finding it difficult to land staff. The Office of Director of Corporate Enforcement (ODCE) took almost three years to hire six senior accountants. The ODCE, which was recently at the heart of the failed case against Seán Fitzpatrick, found itself down to one accountant in 2013. Documents obtained under Freedom of Information give details of the drawn out and increasingly acrimonious saga over three years to fill vital posts.

The whole sorry tale, which included an error-ridden job advertisement, was finally settled, but not before ODCE boss described the process as “nothing short of a disgrace”.

August 2017 will be recorded as a month to be forgotten in the annals of Conroy Gold and Natural Resources. In a month when most are off enjoying holidays, many of the the top brass of the exploration company were being stripped of their titles.

Dissident shareholder Patrick O’Sullivan initially called for an extraordinary general meeting (egm), the purpose of which was to remove six directors from the board and install three new directors of his choosing, including himself, to a board reduced in size. He was successful on the first count but was frustrated in installing three new directors by the company’s chairman and founder, Prof Richard Conroy, on legal advice. This didn’t go down well.

Now O’Sullivan, who is the largest single shareholder in the business, has called for another extraordinary meeting of the group’s shareholders. This time he is turning his fire on Prof Conroy and the managing director of the business Maureen Jones. If successful, and Prof Conroy and Ms Jones are removed, the only original director left in place would be Prof Garth Earls. O’Sullivan is still seeking the appointment of himself, Paul Johnson and Gervaise Heddle to the board.

In the meantime O’Sullivan’s lawyers are seeking assurances that the company won’t appoint new directors or issue new shares before shareholders reconvene.

The stakes are now uncomfortably high for all sides in what is essentially a battle for control of the future direction of a business that has to date yielded nothing for investors.

A tale of two food groups

Irish food giants Glanbia and Kerry Group produced results for the first half of 2017, and it was definitely a tale of two companies.

On the one hand, Glanbia reported a rise in half-year revenue of 11.5 per cent, with group profit rising 4.6 per cent. Its nutritionals business, which accounts for 13 per cent of the world’s €10 billion global sports nutrition market, drove growth and allowed the company reiterate its full-year guidance for between 7 per cent and 10 per cent growth in adjusted earnings per share on a constant currency basis. However, the Kilkenny-based group also warned that if the average euro/dollar exchange rate remained at similar levels for the remainder of 2017, pro-forma adjusted earnings per share growth from continuing operations would be marginally lower than the constant currency result.

Kerry Group also complained about the weakness of the dollar against the euro, and it appeared to have a more profound impact on its forecasts. The Tralee-based company now expects adjusted earnings per share to grow by between 3 per cent and 7 per cent to 333.1-346 cent per share, compared to previous guidance for 5-9 per cent growth. It’s worth noting that this wasn’t necessarily unexpected. Jason Molins at Goodbody stockbrokers had already expected Kerry to revise its full-year projections.

Despite the relatively negative forecast, trading profit for the period rose by 5.2 per cent to €338 million, and the company’s shares rose on the day of the announcement.

Plans for a €75 million redevelopment of the former Central Bank headquarters in Dublin were unveiled this week, with US property giant Hines and its partner Peterson proposing a 300-seat rooftop restaurant, 12,000sq m of office space, as well as shops in adjoining buildings, which they also own.

The developers are looking to have the job completed by Christmas 2018 to tie in the redevelopment with the pedestrianisation of nearby College Green.

Hines and Peterson said they are hoping to attract a restaurateur with experience of operating similar businesses in other European cities to run the eatery that will sit on top of the Dame Street building.

The application is part of a master plan, dubbed Central Plaza, which includes the annex and commercial buildings on Dame Street and Nos 6-9 College Green.