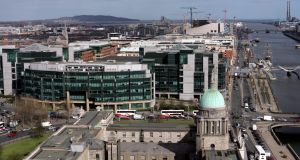 Fifteen of the world’s top 20 banks now have operations in Ireland as fallout from the UK’s vote to leave the European Union continues.

IDA Ireland confirmed on Sunday there have been significant investments in the financial services sector in the first half of the year, with more than 15 financial institutions announcing plans to set up business in Ireland , or expand existing operations.

JP Morgan, Bank of America, Barclays and Citi are just some of the high-profile financial services firms planning to move business here in the wake of Brexit.

“It has been encouraging to see so many high-profile banks and insurance firms publicly endorse Ireland as their destination of choice,” said IDA chief executive Martin Shanahan.

He said the agency expected the flow of announcements by financial services groups examining options for their UK business following the Brexit vote would continue over the coming months, “albeit, they will be hard won”.

The IDA was “actively working” with financial services firms to make them aware of the advantages to doing business in Ireland, he said.

“The decision of the United Kingdom to leave the European Union has created unprecedented political, economic and diplomatic challenges for Ireland,” Mr Shanahan said. “Those challenges extend right across the policy spectrum, where so many areas are now the subject of common approaches and standards at EU level.”

He said the Government was making “steady progress” on its strategy to attract international financial services to Ireland.

“Ireland remains stable and consistent in policy terms and in the areas of taxation, which is a major plus when it comes to attracting investment,” the IDA chief said. But he warned that “post Brexit, nurturing talent, delivering a pro-business ethos and maintaining a consistent track record, must all be the priorities” if the Irish economy was to continue to grow at current rates and remain competitive.

More than a dozen London-based firms have already agreed to set up or expand in Ireland due to Brexit, the IDA said. They include:

– JP Morgan, which has bought a new office in Dublin with capacity for 1,000 employees that would double its current payroll here;

– Bank of America, which will relocate for its principal legal entities to Dublin following the UK’s departure from the EU;

– Barclays, which has said it will use its subsidiary in Ireland for passported EU activity post-Brexit;

– Citi, which is expanding operations in Dublin and three other European cities;

– Insurer Legal & General, which is moving some of its investment management operations to Ireland, and;

– Law firm Pinsent Masons, which is to open a Dublin office.