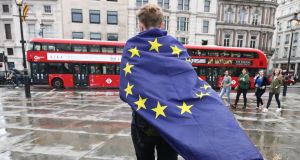 A day after Goodbody Stockbrokers asserted that the recession was finally over, Ibec has followed with a strong growth forecast for the economy for 2017, but warns that Brexit remains a risk.

“The Irish economy is now in a strong position with forecasts showing the pace of employment growth will run above 3 per cent this year for the first time since 2007,” Ibec’s head of tax and fiscal policy Gerard Brady said, adding that it expected unemployment to fall below 6 per cent this year.

Despite this however, Ibec warns that Brexit challenges pose “significant risks to exporting sectors, hitting regional economies and employment hardest”.

“No matter what the outcome, Brexit will hurt both our indigenous exporters and rural regions disproportionately. Budget 2018 must include measures to protect these vulnerable sectors,” Mr Brady said.

In an analysis of those at work, Ibec found that about 243,000 workers, or 13.2 per cent of the employed population, work in the most Brexit exposed sectors such as agri-food and beverages, tourism, transport and traditional manufacturing.

The counties with the highest exposure to a “hard Brexit” are Cavan (28 per cent), Monaghan (27 per cent), Kerry (22 per cent) and Longford (21 per cent), with more than one in five workers in each of those counties employed in exposed sectors.