Figures hold out prospect for third interest rate rise in December as labour force participation rate up one-tenth of a percentage point last month to 62.9% 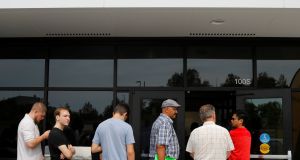 Candidates line up to apply during “Amazon Jobs Day,” which is aimed at filling more than 50,000 roles

The US economy continued to create jobs at a faster-than-expected clip, underlining the strength in the labour market.

The report also showed average hourly earnings rose 0.3 per cent in July from the previous month, in line with expectations. That left the year-on-year growth rate at 2.5 per cent for the fourth consecutive month.

The unemployment rate slid further to 4.3 per cent from 4.4 per cent in June matching a 16-year low struck in May. Meanwhile, the U6 measure, which provides a broader snapshot of the labour market, including people who want to work but have given up searching and those working part-time because they cannot find full-time employment, was unchanged at 8.6 per cent. It is seen as a gauge of underemployment.

That came as the labour force participation rate edged up to 62.9 per cent, from 62.8 per cent previously.

Treasury yields jumped on the report, which fuelled speculation that a third interest rate rise this year could still be on the table despite recent dovish comments from the Federal Reserve.

The dollar meanwhile climbed against the euro, Japanese yen and British pound sterling.

“This should keep the chances of a December rate rise alive,” said Luke Bartholomew, investment strategist at Aberdeen Asset Management. “The next rate rise really boils down to whether inflation picks up and this requires stronger wage growth. While far from spectacular, especially given the further fall in unemployment, today’s wage numbers are just about enough for now.”

The view was echoed by James Knightley, chief international economist at ING.

“Strong payrolls growth, falling unemployment and firmer wage growth are good news and with PPI and CPI set to bounce next week we could see growing support within the Fed for additional rate hikes,” he said.

US President Donald Trump took to Twitter to take credit for the strong job growth numbers. He said: “Excellent Jobs Numbers just released - and I have only just begun. Many job stifling regulations continue to fall. Movement back to USA!”

Over the past three months, job gains have averaged 195,000 per month and economists have cautioned that as the US labour market nears full employment it will get harder to sustain job growth above 200,000. However, it is the wage picture that the Fed is focused on.

A string of weak inflation readings has clouded the outlook for the Fed’s interest rate policy. The Fed’s July statement acknowledged the recent weakness in inflation, which continues to undershoot the central bank’s 2 per cent target, but policymakers expect it to stabilise around that level in the medium term. – Copyright The Financial Times Limited 2017