With Trump-Russia inquiry continuing, US economy could be thrown by any constitutional crisis 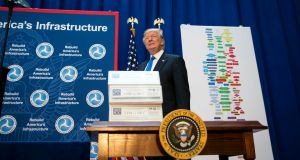 President Donald Trump inherited an economy that was already performing well during the final years of the Obama administration. As a recent Washington Post article put it: “So far, Trump’s economy looks an awful lot like that of his predecessor, Barack Obama.” File photograph: Al Drago/New York Times

As the drama of the Trump presidency continues to captivate the US and the wider world there is one sector of American life that seems unperturbed - the economy.

Latest figures show US economic growth picked up pace in the second quarter, increasing 2.6 per cent between April and June, following a slow start to the year when first quarter growth reached just 1.2 per cent.

Job creation has been growing strongly, with the result that unemployment is at 4.3 per cent, the lowest in 16 years. Consumer spending is robust, companies from McDonald’s to Caterpillar are reporting impressive earnings, while the Dow Jones Industrial Average is continuing to hit record highs.

This 2.6 per cent growth is still a long way from the Trump team’s target of 4 per cent growth - a prediction that is particularly important considering it is being used to justify proposed tax cuts that Republicans have promised. But the underlying economic narrative is undeniably good.

In between his musings on Russia, fake news and Hillary Clinton, the president has been busy reminding his followers of the good economic news. “Highest Stock Market EVER, best economic numbers in years, unemployment lowest in 17 years, wages raising, border secure, S.C.: No W[hite] H[ouse] chaos!”, he jubilantly tweeted last week.

So does President Trump deserve credit for the economy’s strong performance?

Not exactly. Trump inherited an economy that was already performing well during the final years of the Obama administration. As a recent Washington Post article put it: “So far, Trump’s economy looks an awful lot like that of his predecessor, Barack Obama. ”

The US is now in its eighth consecutive year of growth since it emerged from the 2008 financial crisis.

While the “Trump bump” that pushed the markets to record highs in the wake of the Trump victory continues to be felt as investors await a promised infrastructure plan and tax cuts, much of the stock market’s outperformance reflects strong corporate earnings - helped in part by the weak dollar - and expectations of slower-than-expected rate rises from the Fed.

While boardrooms across the US undoubtedly remain sanguine about the Trump promise to scale back regulation and implement tax cuts, there are also troubling signs lurking behind the positive headline figures.

Wage levels remain stubbornly low. The strong job figures - which Trump himself criticised during the election campaign - do not paint a true picture of an employment landscape that is characterised by a growing number of part-time and so-called “gig economy” workers.

In an indication of the challenges that may lie ahead for the US economy, the IMF recently downgraded its growth forecasts for the US, citing uncertainty about the new administration’s ability to follow through on promised policy changes such as tax reform. The fund is now predicting 2.1 per cent growth this year, down from 2.3 per cent.

How long investor confidence in the Trump effect will last is also unknown, considering that Trump has little to show in terms of legislative achievements for his first 200 days in office, despite Republicans controlling all levers of power in Washington.

With Congress currently out of session for its August break and the president retreating to his golf club in New Jersey for a 17-day vacation, investor focus is now turning to the autumn.

While the first six months of the Trump presidency was dominated by the ongoing Russian controversy, infighting at the White House and the Republican party’s failure to pass a healthcare reform Bill, economic matters are expected to come to the fore in the second half of 2017.

There are growing signs that the Republican party is keen to prioritise tax reform in September and October as it tries to score a legislative victory, though securing unity on a proposal as complex as tax reform may prove elusive.

As in the first half of the year, the behaviour of the Federal Reserve may in fact have more impact on the US economy than any policy initiatives from the White House. The autumn plans to be a busy time for the Fed. All indications are that it may begin unwinding its colossal $4.5 trillion (€3.8 trillion) balance sheet as early as next month, while a further interest rate increase is also likely before the end of the year.

The deadline for raising the debt ceiling is also looming at the end of September, with some members of Congress, including fiscally-conservative Republicans, likely to put conditions on agreeing to any debt increase.

With the ongoing inquiry into the Trump campaign team’s links with Russia gathering pace, the US economy could also be thrown off course by any major constitutional crisis.

What does appear certain is that the second half of Trump’s first year in office is likely to be as eventful as the first. For a president that has already rewritten all the rules, anything is possible in the coming months.

1 ‘I’m so lucky to be in the Caribbean – a million miles from Derry Girls’
2 ‘The recovery needs to be a full-scale economic renewal’
3 Minister calls on EU to act against tobacco firms ‘undermining’ menthol ban in Ireland
4 Ryanair expects air fares to fall when flights take off again
5 Michael Smurfit: ‘I asked Trump to invite me to the White House for my 80th birthday’
6 Charlie Chawke plans 290 apartments and hotel on Goat pub site
7 Tobacco makers still trying to make a mint from Irish menthol market
8 Cost of building a new family home rose 7.5% in past year
9 Irish business of Carluccio’s restaurants to be wound up
10 O’Leary’s call for easing of flight restrictions criticised by health experts
Real news has value SUBSCRIBE