On August 9th 2007, BNP Paribas froze funds that were exposed to US subprime mortgages, signalling the start of the credit crunch 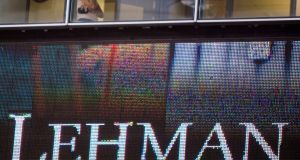 Once BNP Paribas froze its funds it sent a trigger around the world, culminating in the collapse of Lehman Brothers in September 2008. Photograph: Jeremy Bales/Bloomberg

Ten years ago today, on August 9th 2007, BNP Paribas froze funds that were exposed to US subprime mortgages, signalling the start of the credit crunch that threatened the global banking system and subsequently caused the €64 billion bail-out of the Irish banking sector.

Though there had been warning signs previously that all was not well in the global financial system, this announcement by the French giant confirmed the scale of the problem, and short-term lending between banks ground to a halt.

Using faxes and telephones, he and his colleagues crafted the central bank’s response -- a statement that officials were monitoring money-market tensions, followed by a pledge to lend financial institutions as much money overnight as they asked for.

Just one week earlier, the Frenchman had summoned the press to an impromptu briefing to telegraph that an interest-rate increase was imminent. Mervyn King, Bank of England governor at the time, was also sanguine, declaring on the day before the market turmoil struck: “So far what we have seen is not a threat to the financial system. It’s not an international financial crisis.”

Ten years on, as the world’s central banks slowly unwind the unprecedented stimulus their economies came to rely on, the ECB is a different institution. Policy makers of the old school have been replaced by a new generation, Trichet’s insistence to never pre-commit gave way to Draghi’s forward guidance, and the Governing Council’s remit was expanded to include banking supervision.

Stock prices in most leading economies have more than recovered from the turmoil that followed. Those in the US have powered ahead, while their peers in Germany, Japan and even the Brexit-mired UK have risen comfortably above the levels they stood at back before all hell broke loose. One place where equities haven’t fared so well is in the country where the bank that helped spark the crisis is based: France.