Mission impossible: how do Irish companies prepare for Brexit?

Cliff Taylor: firms must factor in costs for a hard Brexit while hoping it never happens 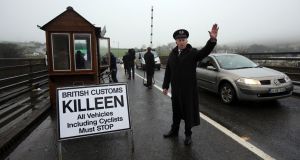 A mock customs post set up in February by anti-Brexit campaigners at Ravensdale, Co Louth, to highlight concerns about the impact on trade. Photograph: Niall Carson/PA Wire

If you are an Irish business how on earth do you plan for Brexit? For a small retailer the questions may go no further than whether the price of biscuits arriving from the UK might go up. But for others – anyone trading on any kind of scale with the UK – the question is whether to incur the considerable cost of planning and preparing for a hard Brexit or whether to just carry on and hope it all works out reasonably smoothly.

The stakes are high. The Tax Strategy Group, a group of senior public servants which sets out the options for the government before the budget, is not known for its hyperbole. In its report ahead of this year’s budget, published this week, it warned that if there was a hard Brexit and Britain leaves the EU without a deal on future trading arrangements then “the impact on traders and hauliers would be huge”.

It is worth looking at exactly what it said would happen. There would be the immediate imposition of tariff barriers – special taxes would be imposed on goods moving both ways – the introduction of customs controls at ports and airports “including a hard Border on the island of Ireland”, and the need for an immediate Border infrastructure.

Trading businesses would face a host of new administrative requirements and problems. There might – in the no-deal scenario – be no immediate agreement allowing goods to move from Ireland through the UK and on to European markets, and major new safety and certification requirements would have a big impact, particularly on the food sector.

Such are the complexities that the officials warn that “it is most unlikely that the administration could be fully in place by March 30th, 2019, with the result that delays and gaps would arise”. There would be new incentives for smugglers, and the likely option of duty free shopping in the North could hit the exchequer here.

Of course, the same factors would all hit British business too – in spades. A report by the Oxera economic consultancy, reported in the Observer last Sunday, suggested that the cost to Britain of new customs checks alone could be at least £1 billion per annum, with businesses hit by delays and bureaucracy and a significant cost to the exchequer of beefing up customs controls.

Now, there are voices in Britain – led by chancellor Philip Hammond – who are calling for an approach which would limit economic damage and give more time for everything to be worked out.

They suggest that Britain will seek a transition period after it leaves the EU to allow time for a new trade deal to be struck and all the necessary arrangements met. If Britain stayed in the Customs Union – which allows free movement of goods – in the meantime and possible the Single Market, this would lessen the risks to Irish businesses significantly.

But as soon as you think that the political mood in Britain is moving in this direction, it all swings back the other way. Theresa May’s spokesman came out this week to insist that free movement of people between the EU and the UK would end when Britain left in March 2019. If this happens the EU is most unlikely to offer Britain ongoing membership of the Single Market, even for a transition period. Would they let Britain stay in the Customs Union for a period? Possibly, though much will depend on whether the talks can get going for real and start to make progress.

Businesses cannot wait. Talks on a new trading arrangement between Britain and the EU may not even start now until early next year. And even this depends on progress being made on Britain’s exit bill and other issues, including the future of the Irish Border.

Already big banks are moving out of London. Big Irish companies are starting to adjust their supply lines. Some Irish food companies have bought operations in the UK so that they can continue to serve that market freely after Brexit.

SMEs do not have the same time and resources to plan out different scenarios. Even for bigger Irish firms this is going to be a stretch. But those involved in trading with the UK really don’t have a choice.

What new rules will apply may not be clear until the middle of next year – less than a year before Brexit itself. This may involve a transition period, giving more time, or even a reversion back to a softer and less threatening version of Brexit. But it is impossible to rely on this happening.

And a hard Brexit, with no deal, remains a real risk. Irish firms have no choice but to take on the cost of preparing for this while fervently hoping it never happens.