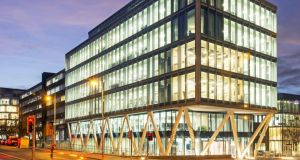 The Velasco building on Grand Canal , Dublin, which was let to Google in 2017.

The continuing increase in office rental prices is forcing Irish companies to consider locations outside of Dublin’s city centre, Lisney has said.

Speaking to The Irish Times, Lisney divisional director Paul Hipwell noted that “any Irish companies looking to expand, or relocate . . . will give great consideration into alternative locations” after a report suggested that tech companies were dominating the take-up of office stock.

Lisney’s report shows Facebook and Google will occupy 38,500sq m and 74,600 sq m respectively in the capital by the end of this year, or 4 per cent of all commercial office space.

“While they’re here it’s fantastic . . . but clearly if there’s a sudden shock to the system and one of them has to pull out that would clearly have adverse effects,” Mr Hipwell added.

Office rents are hovering around the €60 per sq ft level, near that achieved in 2006 at the peak of the Celtic Tiger. As vacancy rates reduce to record lows, Lisney suggests that this could force indigenous Irish companies to suburban locations, which could ultimately impose a big financial cost.

Separately, rival real estate company CBRE said “occupiers are comfortable moving some elements of their operations to locations outside of the traditional CBD [central business district] as long as they retain the ability to attract talent.”

Dublin currently has a vacancy rate of 8.7 per cent, with 6.9 per cent in the city centre. Rates this low haven’t been seen since 2000, Lisney said.

The report noted that 189,000sq m of space is due to come on stream this year, with 37,000sq m of that located outside the city centre. Of the city centre space due to be completed, 68 per cent was already pre-let or reserved.

CBRE backed up Lisney’s suggestion that leasing activity in Dublin is likely to occur in the suburbs “as occupiers move some functions of their business to more cost-effective locations”.

CBRE said the result of the high occupancy would be an increased demand for flexible office accommodation in 2018 while it also sees a number of “Brexit-related mandates to solidify, with occupiers who heretofore have been exploring options, now committing to specific buildings”.

Marie Hunt, CBRE’s head of research, said: “In addition to demand for office and industrial and logistics opportunities, we expect to see continued flows of capital into alternative sectors over the course of the next 12 months with particularly strong demand for residential investment opportunities in Dublin, considering the stable long-term income streams this sector can deliver.”

Looking further down the line, Lisney suggested that in 2019, construction of commercial office space needs to “ramp up significantly in order to keep pace with predicted demand”.

The current Lisney estimate suggests 2019 completions will amount to less than the space already occupied by Facebook.

“There is evidence of blue-chip international companies winning out over indigenous Irish companies. In reality indigenous businesses are struggling to match the rent paying ability of overseas occupiers,” he added.