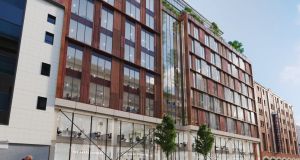 The Paper Exchange is one of a small number of new office developments proposed for Belfast.

Office rents in Belfast have increased to around 50 per cent higher than 2007 levels as the city had a strong take up of office space in the fourth quarter of last year despite Brexit headwinds.

The last three months of 2017 proved to be the strongest period in two years for Belfast’s office market with take-up of space reaching over 430,000sq ft, research from property group Savills shows.

While both take-up and rents have pushed upwards. Savills suggests that prime rent has “yet to be tested due to a lack of new stock”.

One of the most notable transactions last year, Savills says, was the pre-letting of over 104,000sq ft of space by Her Majesty’s Revenue and Customs at Erskine House.

Meanwhile, the most active sector in the office market continued to be technology, media and telecommunications occupiers, who accounted for 19 of the 47 transactions in 2017 and 33 per cent of the overall take up.

Despite a challenging market in 2017, there were a number of positives, including HMRC taking the largest pre-let on record at Erskine House...However the supply of new Grade A offices remains the limiting factor,” said Simon McEvoy of Savills Northern Ireland.

While the vacancy rate in Belfast is quite low at 7.2 per cent, vacancies in Grade A offices are considerably lower at 3.1 per cent and Savills notes that there are no city centre options available that can offer in excess of 25,000sq ft of neighbouring space.

“There are a number of large occupiers in Belfast with upcoming lease events in largely defunct buildings. A select few are in the position to agree a pre-let however the majority will only consider options that have started the process of delivery. We need to commence construction and start the supply tap now to meet this demand,” Mr McEvoy added.

In an effort to meet that demand from both indigenous and foreign companies, Savills suggested that speculative development will have to start in the city. While refurbishment of some office space has begun, the property group suggests “next generation spaces” will be needed to attract global companies.