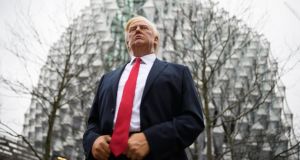 A model of US president Donald Trump from the Madame Tussaud’s waxwork attraction photographed on Friday outside the new US embassy in London. Photograph: Leon Neal/Getty Images

Irish developer Seán Mulryan’s Ballymore Properties sold the site on which the controversial new US embassy in London stands and has just signed an £82 million loan to create a mixed-use scheme adjacent to the building.

US president Donald Trump dramatically cancelled a planned visit to London yesterday to open the new embassy. The move came as he claimed that the Obama administration had sold the previous embassy on Grosvenor Square for “peanuts” only to build a new one in a “bad deal” that had cost $1.2 billion.

The embassy, which is believed to be the most expensive in the world, has been funded purely from selling US government properties in London.

The Ballymore Group took to Twitter on Friday to respond to Mr Trump’s statement describing it as “fake news”.

Reason I canceled my trip to London is that I am not a big fan of the Obama Administration having sold perhaps the best located and finest embassy in London for “peanuts,” only to build a new one in an off location for 1.2 billion dollars. Bad deal. Wanted me to cut ribbon-NO!

The US ambassador to the United Kingdom, Woody Johnson, recently described the embassy as a “bargain” compared with the $1.6 billion stadium built for his NFL team the New York Jets in New Jersey.

Trump said in a tweet late on Thursday: “[The] reason I cancelled my trip to London is that I am not a big fan of the Obama administration having sold perhaps the best located and finest embassy in London for ‘peanuts’, only to build a new one in an off location for $1.2 billion,”

The US embassy and consulates announced plans in October 2008 to relocate from its former base in Grosvenor Square to Embassy Gardens London’s Nine Elms on the south bank of the Thames river. The decision was made by the Bush administration several months before Barack Obama took office in January 2009.

The land on which the new embassy stands was sold to the US government by Ballymore Group after a deal was reached in 2008. The group has other commercial and residential development projects in the area estimated to be worth more than €2 billion.

At the time of its launch, former mayor of London Boris Johnson described the Embassy Gardens project as “possibly the most important regeneration story in London and in the UK over the next 20 years”.

The Dutch have recently relocated their embassy to the area, which lies directly across the river from Pimlico, and the nearby regeneration of Battersea Power Station. Publisher Penguin Random House last month also announced it had signed an agreement to take a lease for One Embassy Gardens.

The Embassy Gardens development set record sales values during phase one of the project. Ballymore this week signed an £82 million three-year development loan with Lloyds Bank to create a mixed-use scheme located close to the US embassy which will include up to 1,750 new homes and more than 20,000sq m of office and flexible workspace spread over eight building plots rising up to 23 storeys in height.