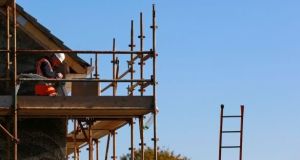 Listed housebuilder Cairn Homes has said the supply of new residential property in the Irish market will continue to undershoot demand significantly over the next two years.

In a trading update, the company said market conditions remain positive with continued strong demand for property during the latter part of 2017.

Estimated earnings before interest, tax, depreciation and amortisation (Ebitda) for 2017 is in the range of €14.5 million to €15 million, as against €3.8 million a year earlier.

Goodbody analyst Eamonn Hughes said the full-year Ebitda guidance was slightly below its €16.3 million forecast, due to central overheads being a little higher than it had anticipated. Davy meanwhile had forecast Ebitda of €17.4 million.

“The previous guidance was for operating costs to fall in the range of 2 per cent to 2.5 per cent of revenues, but the second-half run rate would suggest a level above 3 per cent,” it said in a note to investors.

Cairn said it achieved €131 million in residential revenues last year with the average selling price for a property totalling €314,000 (ex-VAT).

Cairn is currently building on three sites and expects further apartment commencements in prime Dublin city locations during 2018. The company also has a student apartment pipeline of 1,700 beds at five developments.

“Achieving 418 home sales is a very strong outcome in our second full trading year. We completed sales on seven separate developments during the year. Our practice of acquiring and building on larger scale developments, on average in excess of 400 units, allowed us to respond quickly to increased demand during 2017,” said chief executive Michael Stanley.

“Given the quality and historical cost of our land bank, our dual focus on competitively priced houses and premium apartments and our increasing operational capability, we continue to look forward with confidence,” he added.

Cairn is due to publish its full-year results in early March.

1 Basic income for all: Has the Covid crisis given us a new economic model?
2 Only way is up for Stripe as valuation skyrockets
3 Promontoria barred from pursuing doctor over Ulster Bank loan
4 ‘I don’t need to do any of this. . .I don’t actually need to work.’
5 Fiona Reddan: Who’s afraid of Revolut? Not AIB and BOI it seems
6 ‘Make plans but don’t hold on to them too seriously’
7 Kinzen raises $2.2m as it helps clients fight ‘misinformation’
8 Unilever’s Dutch and British arms merge after 90 years ahead of Brexit
9 Online shoppers face unwelcome tax surprise
10 Admission of mistake in Oxford vaccine dose raises doubts over reliability
Real news has value SUBSCRIBE