Record numbers of passengers from Republic use Belfast airport

Strength of the euro encouraged 600,000 residents of the South to fly from Belfast last year 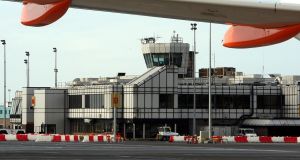 The number of passengers from the South who chose to fly from Belfast International Airport (BIA) soared last year to a record high of 600,000, latest figures show.

BIA said the strength of the euro against the pound was the key factor behind the increase in the number of residents from the South travelling north to fly to one of the 76 destinations on offer.

Graham Keddie, BIA’s managing director, said: “We have always attracted a lot of passengers from the Donegal and Sligo regions, but there is no doubt that the performance of the euro against the pound has given us a competitive edge and we are attracting passengers from much further afield now.

“If nothing else the fact that we saw quite a few Dublin GAA jerseys passing through BIA last year highlights to us that people in the South – and not just the border counties – have started looking at Northern Ireland again because of the value it offers.”

Overall, passenger numbers at BIA jumped to 5.84 million people last year; Mr Keddie hopes it will attract six million passengers this year – fuelled in part by increasing numbers of residents from the South opting to travel via the North.

“The number of passengers from the South reached pre-recession levels during 2017; this year we’ve hundreds of thousands of additional seats on new routes on offer, we’ve got extra aircraft at BIA and we intend to build on what we achieved last year,” he said.

Northern Ireland residents have used Dublin Airport to travel abroad for a number of years. Dublin Airport puts the figure at about 1.2 million passengers a year.

Including the number of overseas visitors that use the airport to travel to the region, total Northern Ireland-related passenger traffic is more than two million a year. Dublin Airport describes itself as a “key gateway” for Northern Ireland.