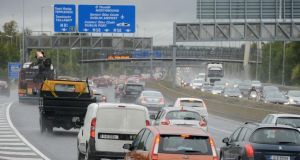 Yew Grove Reit said it will focus on properties in Dublin city and as far as a 30-minute commute of the M50 motorway, other major regional towns and cities, and IDA business and technology parks. Photograph: Dave Meehan

A new Irish real-estate investment trust (reit) that is set to float in the coming weeks has departed from a well-worn path of peers in the past five years by deciding not to court international hedge funds as key investors.

Sources said that the management team behind Yew Grove Reit, which is seeking to raise €100 million in an initial public offering (IPO), have decided not to approach hedge funds, which tend to have an opportunistic short-term investment view, in favour of “long only” investors, such as pension funds and insurance firms.

The founding managers of the funds – Jonathan Laredo, Michael Gibbons and Charles Peach – are all executives of UK-based Peak Capital Partners, which set up a fund, Yew Tree Investments, to buy Irish property in the wake of the property crash. They are rolling into the trust an initial portfolio of 10 such properties – mainly office and industrial assets let to Irish State entities, IDA supported companies and large corporate – valued at €25.9 million into the trust.

Barry O’Dowd, a senior IDA Ireland executive who is set to retire from the agency next month, will chair Yew Grove Reit.

The move to eschew hedge funds comes as Irish commercial property returns have started to ease back into single-digit territory, following years of strong capital growth after the Irish property market began to recover in 2012. This is forcing property firms to focus on investing in their portfolios to drive up rental income and dividend payments.

In July 2013, the first IPO of an Irish property trust, Green Reit, attracted US hedge-fund guru John Paulson, whose firm, Paulson & Co, snapped up an initial 13 per cent stake in the company after making billions of dollars betting against the US housing and subprime markets before the 2008 financial crisis.

The flotation later that year of Green Reit lured Hungarian-US financier George Soros, who became known as “the man who broke the Bank of England” as he earned $1.5 billion (€1.3 billion) betting against sterling in 1992, as well as a collection of hedge funds including Moore Capital Management and Marshall Wace.

Irish Residential Property Reit’s 2014 flotation saw two hedge funds, Fir Tree Partners and Starwood Real Estate Securities of Connecticut, mop up more than 22 per cent of the stock between them.

Cairn Homes, which, in June 205, became the first Irish homebuilder to float in almost two decades, was backed by hedge funds such as Lansdowne Partners and Moore Capital. Many of the hedge funds have since cut their stakes in Irish property-related companies, while some have exited their investment entirely.

Yew Grove Reit has indicated to investors that it is interested in small to mid-market office deals worth between €3 million and €20 million outside of Dublin’s central business district in order to generate higher rental yields.

The managers have opted to only pay themselves half their salaries until their trust achieves a net asset value of €175 million.

1 Copper Face Jacks pays out €45.95m in dividends to owner
2 What is Covid Tracker Ireland?
3 EU guidance undermines Irish banks’ insistence on charging interest on mortgages
4 Will family’s tax debt stop me getting my inheritance?
5 Why gift a son now if it eats into his tax-free inheritance threshold?
6 SuperValu and Centra MD Martin Kelleher stepping down
7 Ireland’s economy set to shrink 8.5% due to pandemic
8 Workers reject Shannon Airport plan for 230 redundancies and 20% pay cut
9 European shares fall on warning of deeper recession than expected
10 EY failed to ask for Wirecard bank statements for three years
Real news has value SUBSCRIBE