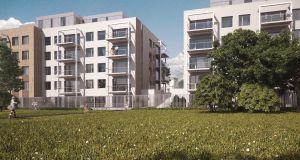 ILIM is believed to have paid more than €100 million for the Fernbank scheme, which is situated on land formerly owned by Notre Dame school in Churchtown.

Irish Life Investment Managers (ILIM) has bought 262 apartments in south Dublin that were due to be put up for sale and the asset manager plans to rent them.

ILIM is believed to have paid more than €100 million to Irish builder Park Developments for the Fernbank scheme, which is situated on land formerly owned by Notre Dame school in Churchtown.

This surprise move is a blow to those who were hoping to buy an apartment at the prime site, just a short walk from the Dundrum Towncentre and Luas stop. But it will help to satisfy the pent-up demand for rental properties in the area.

More than 1,000 people had registered their interest in buying the apartments with Park Developments, which began informing them yesterday of its decision to sell the site.

Park will complete the construction, with the first units due to be ready by the end of this year. The remainder will be finished in the first quarter of 2020. The scheme comprises 56 one-bedroom units, 188 two-beds and 17 three-bed apartments.

This is part of a move by ILIM to establish itself as an institutional landlord. The asset manager expects to invest about €1 billion for investors over the next couple of years acquiring properties that will be rented to tenants.

Park’s managing director Sean O’Neill said the sale would enable it to “accelerate the delivery” of other developments in its pipeline. It had bought the Churchtown site in 2005 for €30 million.

“The transaction is a significant departure from our normal approach to selling this type of residential development,” he added.

Martin O’Reilly, ILIM’s head of property, expressed his delight at securing such a “high-class scheme” for its fund, adding that it would “appeal to a wide range of renters”.

1 Chris Johns: Economies may enjoy ‘roaring twenties’ if ministers learn lessons
2 Wet pub openings fuelled rise in Irish Covid infection rates – report
3 Profits jump threefold at LinkedIn’s Irish unit to $294.2m
4 Basic income for all: Has the Covid crisis given us a new economic model?
5 ‘I don’t need to do any of this. . .I don’t actually need to work.’
6 Only way is up for Stripe as valuation skyrockets
7 Admission of mistake in Oxford vaccine dose raises doubts over reliability
8 There was no vaccine for Anglo: Why the last crisis was different
9 How long can Government afford to keep State pension age at 66?
10 Direct sea routes to Europe offer certainty in choppy Brexit waters
Real news has value SUBSCRIBE