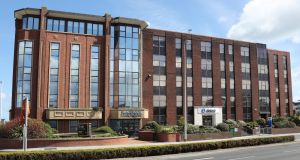 A collection of three adjoining modern office buildings in need of refurbishment and asset management in the busy south Dublin suburb of Blackrock are expected to be of interest to a range of property companies and investors when they are offered for sale in individual lots.

The three buildings have a combined floor area of 4,683sq m (50,409sq ft) on a site of 0.48 of an acre, which runs from George’s Avenue to Carysfort Avenue and fronting on to the main Blackrock bypass. On-site parking for 79 cars is divided between the three buildings.

Two of the blocks, Blackrock Hall and Zurich House, were developed in the 1980s. The third building, Blackrock Park House, was added in the 1990s.

Joint agents Lisney and HWBC are handling the sale, and quoting in the region of €4.5 million for Blackrock Park House, which was previously occupied by AIG and is now vacant. The five-storey building extends to 1,561sq m (16,812sq ft) and comes with 29 car parking spaces.

According to James Nugent of Lisney, the three properties are well presented internally but would benefit from some refurbishment.

Zurich recently agreed to pre-lease a newly developed adjoining block, Enterprise House, which is due to be completed in July 2019. The company has taken a 20-year lease of the 6,503sq m (70,000sq ft) block at a rent of €30 per sq ft. Zurich is expected to vacate Zurich House and Blackrock Hall when the leases expire.

Nugent called the sale a rare opportunity for investors or developers to avail of an existing income while considering the refurbishment or redevelopment prospects for the three buildings, which could be used for residential as well as commercial uses.

The next owner could decide to engage with Dún Laoghaire-Rathdown County Council about the future use of an adjoining surface car park.

Blackrock is currently undergoing a considerable number of redevelopments, not least the Frascati Shopping Centre, which is being refurbished and extended at a cost of more than €30 million. Close by, Friends First is spending around €10 million on the upgrading of Blackrock Shopping Centre and the installation of a new glazed roof.