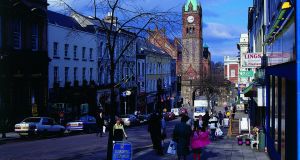 Derry city. Nearly a decade ago the jobless rate in Northern Ireland was sitting at a high of around 8.2 per cent.

The number of people without a job in the North has fallen to an all-time low.

New figures from the Northern Ireland Statistics and Research Agency (NISRA) on Tuesday show that the North’s jobless rate fell to a record low of 3.1 per cent in the three months to March.

NISRA said the North’s jobless rate dropped significantly below the average UK rate of 4.2 per cent over the same period and was below the comparable European Union rate of 7.1 per cent in February and the Republic’s  6.1 per cent unemployment rate in March.

Nearly a decade ago the jobless rate in Northern Ireland was sitting at a high of around 8.2 per cent – at 3.1 per cent it is currently at its lowest level since records began in 1995.

According to the latest statistics the total number of people without a job in Northern Ireland fell over the last quarter by 7,000 to 28,000 people.

But the long term unemployed and youth jobless rate remains higher in the North at 51 per cent compared to the UK average of 25.3 per cent.

Northern Ireland also still has a big problem when it comes to the number of people registered as “economically inactive”, these are people who are not in work or looking for a job and includes students, retired and the long-term sick or disabled.

Over  the last 10 years the North’s economic inactivity rate has remained consistently higher than the UK. It was estimated to be 28 per cent over the last quarter – which represented 328,000 people – in contrast the average UK rate was 21 per cent, which was a record low.

1 Why are markets booming when a crash is on the way?
2 Your old car could be telling others all your personal data
3 Permission sought for €150m film and media campus in Wicklow
4 AIB U-turn on mortgage block for those on Covid wage subsidy
5 Government committed to finalising roadmap for safe overseas travel ‘shortly’
6 Covid-19: Publicans and restaurateurs row over calls for VAT cuts
7 Drink tax row; no respite for Bewley’s; and mortgage U-turn at AIB
8 Staff at Bewley’s cafe on Grafton Street are made redundant
9 Dunnes Stores trials online ordering from Cornelscourt outlet
10 Vodafone to speed up 5G rollout using DSS technology
Real news has value SUBSCRIBE