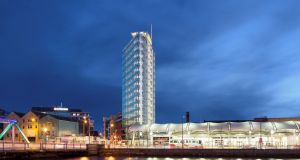 A €20 million, 15-storey, glass fronted triangular office building is to be built in the docklands in Cork city, on a brownfield site just yards from the Parnell Place bus station

A €20 million, 15-storey, glass fronted triangular office building is to be built in the docklands in Cork city, on a brownfield site just yards from the Parnell Place bus station.

Tower Holdings Group, owned by Kevin O’Sullivan, will oversee the development of the proposed commercial building. An application has been lodged with Cork City Council seeking full planning permission to build the 5,900 square metre office development on the site.

Kevin and Donal O’Sullivan, the owners and developers of the Port of Cork, Custom House site, have completed the purchase of a nearby 310 square metre triangular site on Clontarf Street that has remained unused for several years. The brothers have delivered some of New York’s tallest buildings as contractors and developers.

The Prism Building on Clontarf Street has been designed by Cork based architects Reddy Architecture + Urbanism to produce a light filled glass office building on a cross-city corridor.

Tower Holdings Group president Kevin O’Sullivan said the Clontarf Street development fits in with plans for the revitalisation of the heart of the city.

“We are very excited about this development. Our aim is to build a slender, elegant, transparent glass structure that is as much a piece of sculpture as it is a building. The development of The Prism Building will enhance a neglected, yet strategic, area of the city with a light filled building, providing a state of the art modern office building which is very much in demand in Cork City.

“Our hope is that this development will enhance and enliven the local area, acting as a catalyst for the development of nearby sites. It will become a location marker for a rejuvenated city quarter, providing a much-needed link between the city centre and the docklands,” he added.

Architect Seán Kearns said the iconic Flatiron Building on New York’s Fifth Avenue was one of the inspirations for the Clontarf Street development.

Meanwhile, Kevin O’Sullivan said they are also at an advanced stage of pre-planning consultation with Cork City Council for a separate €250m, multi-storey hotel and apartment development on the nearby Custom House site which they acquired last year.

The O’Sullivan brothers have been responsible for building parts of New York’s Ground Zero towers and 9/11 memorial. They have also worked in Apple’s flagship store in the city. The natives of Ballinskelligs in Co Kerry moved to New York over thirty years ago.

1 Chris Johns: Past is another country when it comes to our post-pandemic future
2 ‘I’m so lucky to be in the Caribbean – a million miles from Derry Girls’
3 Michael Smurfit: ‘I asked Trump to invite me to the White House for my 80th birthday’
4 Joint accounts: if one of us dies, can the other access the money?
5 ‘The recovery needs to be a full-scale economic renewal’
6 Tax and the Pandemic Unemployment Payment: Your questions answered
7 Minister calls on EU to act against tobacco firms ‘undermining’ menthol ban in Ireland
8 Ryanair expects air fares to fall when flights take off again
9 Charlie Chawke plans 290 apartments and hotel on Goat pub site
10 Ireland stands to benefit in a big way from investing in public transport
Real news has value SUBSCRIBE