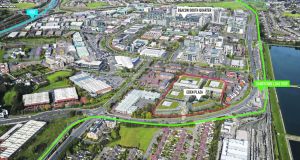 The Sandyford site, which extends to 5.26 acres on Blackthorn Avenue adjacent to Sandyford Luas stop, is on the market through CBRE

Irish private equity house Ardstone Capital is selling a prime, ready-to-go office site in Sandyford as it pivots from commercial to residential development.

The site, which extends to 5.26 acres on Blackthorn Avenue adjacent to Sandyford Luas stop, is on the market through CBRE for €20 million.

It has two live planning permissions for office developments extending to between 35,000 and 42,000sq m (376,736 and 452,084sq ft). Designed by Henry J Lyons, this so-called Eden Plaza scheme is spread over five modern blocks, with ancillary space for a cafe and retail unit.

Ardstone, which was established in 2004, acquired the site from Nama for €6.5 million but it previously changed hands during the boom in October 2007 for a figure “in the late €70s million” to property developer and businessman Reg Tuthill and Derek O’Leary, a business partner.

The site was owned for many years by Ulster Bank – it had a data centre there – and was part of a €1.5 billion portfolio the bank parent, Royal Bank of Scotland, sold to Morgan Stanley Real Estate at the end of 2005.

Sandyford is Dublin’s top suburban office location with easy access to the M50, N11 and the Luas while the area is to have a stop on the recently announced MetroLink rail service with connectivity to Dublin city centre and airport.

The area is home to Microsoft, Bank of America Merril Lynch, Vodafone, AIB, Google and Salesforce. Grade A office vacancy rates are about 5.8 per cent, according to CBRE, with headline rents nearing €307 per sq m (€28.50 per sq ft) – about half the going rate in Dublin city centre.

Ardstone, having acquired a prime residential land bank, is now to focus on delivering 3,500 starter homes while also moving into the private rental sector.

BP halves dividend as Covid-19 turmoil pushes oil major to loss 14:56
House completions down 33% but output has rebounded 15:09
Ulster Bank introduces Apple Pay for business customers 12:58
Facebook opens accelerator programme for e-commerce start-ups 12:24
How safe is it to go back to the office? 12:05

1 How safe is it to go back to the office?
2 More than 40% of help-to-buy recipients already had deposit
3 Most workers now expect choice to work from home part-time
4 HealthBeacon becomes official NHS supplier and seeks extra funds
5 Owner of Dundrum Town Centre to sell prized assets
6 Elderly parents living in property you own will save you on capital gains tax
7 56 financial firms entered or expanded Irish operations in 2020
8 Cinema tensions laid bare by deep crack in theatrical release windows
9 House completions down 33% but output has rebounded
10 It is never too early to talk about saving for Christmas
Real news has value SUBSCRIBE