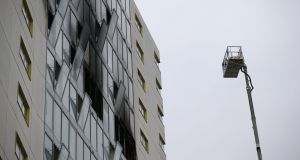 The aftermath of a fire at the Metro hotel in Ballymun in March this year. Photograph: Nick Bradshaw

This means both councils are likely to outsource some inspection services in their council areas.

This scoping exercise – “informal and outside any tendering process” – is in advance of a tender competition for inspections which is expected to go live in October.

Both councils point out that follow-up inspections may be required to ensure compliance with regulations.

Calls for better, and more frequent, inspections of buildings have grown since 2011 when more than 250 people were evacuated from the Priory Hall apartment scheme near Donaghmede in north Dublin because of fire-safety risks.

Concerns then emerged in 2015 over fire safety at the high-end Longboat Quay apartment scheme in the south Dublin docklands. Other boom-era buildings have been found to be substandard in terms of safety.

Dublin City Council has stepped up fire-safety inspections recently – 2,300 in 2016 compared to 1,204 in 2015 – while the number of fire-safety notices it issued last year more than doubled on 2016’s figure.