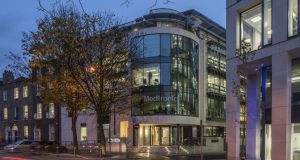 Davy building at 20 On Hatch, on Hatch Street Lower: MetLife agreed to extend the lease on its European operational base by a further 10 years. Photograph: Gareth Byrne Photography

The Davy Irish Property Fund has raised by 45 per cent the value of a key portfolio building in Dublin that’s mainly let out to MetLife, as the US financial services group agreed to extend the lease on its European operational base by a further 10 years.

The fund, managed by Davy’s real estate division, has increased the value on the six-storey over basement building in its portfolio to €40 million from the €27.5 million it paid for the property in 2014.

MetLife opened its Dublin office in 2006 at 20 On Hatch, on Hatch Street Lower, which now serves as the insurance group’s operational headquarters for western and central Europe. The company occupies five floors on the building, which has a total net lettable area of 44,400sq ft (4,125sq m). Medtronic, the medical technology group, occupies the remaining floor.

MetLife has agreed to pay rent of in excess of €50 per square foot under the terms of the extended lease.

“We continue to actively engage tenants across our entire office, retail and industrial portfolio, resulting in successfully contracting over 100,000sq ft of space over the last six months,” said Simon MacKinnon of investor relations at Davy Real Estate. “Securing this rental income, ahead of forecasts, significantly strengthens our target 5 per cent income distribution yield for the year.”

Davy Real Estate manages over €1.5 billion of property assets. Other key assets in its Irish Property Fund include a controlling stake in Nutgrove Shopping Centre in Rathfarnham in south Dublin.