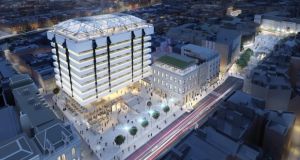 An artist’s impression of One Central Plaza, which was previously the headquarters for the State’s financial regulators, will be WeWork’s third shared office space in Dublin

Office construction rates in Dublin are now back at boom-time levels with demand being driven by “big tech” and finance firms and a new wave of shared-office space providers, according to property consultancy HWBC.

In its latest half-year review of the Dublin office market, the group reported that more than four million sq ft of office space was currently under construction in the capital, which matches the level of construction seen in Dublin in the mid-2000s.

It said a significant level of demand was being generated by coworking space firms such as WeWork. The US multinational popular with millennials and tech start-ups accounted for a “massive” 15 per cent of the market take-up this year, HWBC said.

The company recently signed a lease agreement to become the anchor tenant at One Central Plaza on Dame Street, previously the headquarters of the Central Bank.

In its report, the consultancy said that despite the big uptick in supply there was no evidence of overcapacity in the commercial market, noting demand was supported by strong economic growth combined with a rapid acceleration in employment. It also suggested that Brexit-related demand was not a major driver of the market.

HWBC highlighted “important differences” between the current boom in office construction and the previous one, suggesting developments this time around were “well-targeted at preferred tenant locations” in contrast to many poorly located schemes funded by “reckless lending” previously.

Headline rents, the report said, have remained steady at €60-€65 per sq ft, with “the odd outlier deal” in the late €60s such as for the new building in Dawson Street.

Property firm Green Reit recently developed the block at the junction of Dawson and Molesworth streets with the London-based Ivy restaurant taking up one of the anchor tenancies.

HWBC said in some cases landlords were agreeing generous rent-free packages of up to 12 months for long-term lease commitments.

However, it said it expected tenant incentives to gradually reduce over the next 12 months, potentially easing the pressure on further rent increases for prime space.

The report said that while the office market is supplying enough space to meet demand, a major concern was the lack of affordable rental accommodation for the thousands of workers being hired for new jobs created by multinationals investing in Ireland.

HWBC noted that some large employers have looked into combining office and staff needs in the same location. JP Morgan and Google recently purchased office buildings at Capital Dock and Boland’s Quay, which contain large apartment complexes on the same site.

“The fact that construction levels are at boom-time levels might ring the over-supply alarm bells if the continuing occupier demand in the Dublin office market wasn’t so strong,” managing director of HWBC Tony Waters said.

“Over 70 per cent of the space due for completion this year is already pre-committed to tenants. With a robust demand pipeline and well targeted development locations, this construction cycle is very different from the previous speculative boom,” he said.