Multinational to lease 3,600sq m of space in six-storey office block under construction 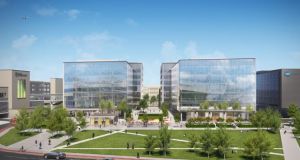 CGI of the new Dublin Airport Central development. Kellogg’s new HQ will be in the Three building on the left.

Dublin Airport Central, a major new office development in the heart of the airport campus, has landed a high-profile anchor tenant for the first of two headquarter-style buildings now under construction.

US multinational food company Kellogg's is to relocate its 220 Irish and European office staff to Three Dublin Airport Central, where the six-storey block will be located close to Terminal 2.

Kellogg's is currently based at Airside Business Park on the outskirts of Swords and expects to begin the fit-out of its new headquarters by the second quarter of 2019. The company will have the use of 2½ floors and around 65 car-parking spaces in the block, which is being built to international standards.

Construction is also well advanced on a second block, Two Dublin Airport Central, which will extend to about 11,500sq m (123,786sq ft).

The Dublin Airport Authority has planning permission for four corporate buildings, with 41,700sq m (448,854sq ft) of offices and associated facilities. DAA chief executive Dalton Philips said he was delighted to have secured Kellogg as the first tenant.

“We can’t wait to welcome Kellogg and its employees to their new home. Ireland is well recognised as a world-class location for business and Dublin Airport Central can accommodate the requirements of major multinationals such as Kellogg and also Irish firms seeking a modern, flexible location with unmatched connectivity.”

The two office buildings under way are the first newly constructed blocks at the airport and follow the redevelopment of the 1960s former Aer Lingus headquarters, which is now known as One Dublin Airport Central and accommodates about 500 ESB international staff.

He said the business park appealed to internationally-focused firms due to its unrivalled location, the high quality of the buildings, the amenities available on site and the flexibility for future growth.

The Dublin Airport campus is home to more than 200 businesses, which together employ more than 19,000 people. It has more than 30 restaurants and cafes, a range of retail outlets, and leisure facilities including a gym and swimming pool.

Last year Dublin Airport handled 30 million passengers and so far this year the numbers are 6 per cent higher.