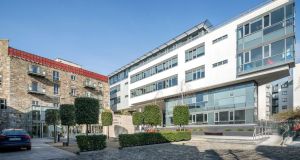 Property investor M7 has earned a €9 million profit on the €33.5 million sale of a Dublin office that it bought 20 months ago.

The company, whose headquarters is in London, has sold an office block on Fumbally Lane, close to St Patrick’s Cathedral in Dublin, for €33.5 million to local player BCP Asset Management.

The deal earned a profit of more than €9 million for M7, which bought the block in December 2016 for a reported €24 million.

Occupiers were paying about €1.7 million a year in rent when the building was put up for sale in late 2016, but there was scope to increase this to €2.8 million.

During that time, the real estate investor cut the building’s vacancy rate to 2 per cent from 17 per cent.

The company also spent some money on improving the property’s common areas, including landscaping its courtyard and outside seating.

John Murnaghan, M7’s head of real estate for the UK and Ireland, said the sale of Fumbally Lane ahead of the time that the company originally expected demonstrated the strong demand in Dublin for such properties.

He predicted that the wider regeneration of the surrounding area would increase the location’s attractiveness to business in the future.

Developer Sean Mulryan’s Markland Holdings built Fumbally Square. The property was one of several that it sold to help pay off €300 million in debt, most of which was due to State agency Nama.

M7 has properties worth €7.1 billion across 13 European countries, including Denmark, France, Germany, Hungary, Poland and the UK.

BCP manages assets worth a total of €2.5 billion, €700 million of which is invested in property and €1.8 billion in capital-secured bonds. CBRE advised M7 on the deal, while Savills acted for BCP.

Beware of the rush to get back to normal business amid Covid-19 03:15
Satirical column and photograph of child among complaints to Press Ombudsman 01:00
Pandemic Unemployment Payment: Your questions answered 00:31
Cairn Homes seeks permission for 611 apartments on RTÉ site 21:06
Cityjet pilots fear Scandinavian crew will replace them 20:50