Cushman and Wakefield gets chance to rebound from sluggish debut 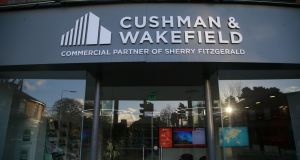 Cushman and Wakefield has failed to inspire investors in the weeks since its August 2nd debut. Photograph: Nick Bradshaw

Cushman and Wakefield Plc, the biggest US real estate listing since January, will get a chance to rebound from a sluggish debut with a round of analyst initiations next week.

On August 27th, a quiet period expires for what may be the company’s friendliest analysts on Wall Street: those who work for banks that underwrote the initial public offering earlier this month. The 25-day trading anniversary is likely to prompt initiations from lead banks Morgan Stanley, JPMorgan Chase and Co, Goldman Sachs Group Inc and UBS Group AG.

Cushman and Wakefield has failed to inspire investors in the weeks since its August 2nd debut. The Chicago-based company’s shares surged 9 per cent in the first two days of trading but have since stalled.

Shares rose as much as 4.1 per cent intraday Friday in the final session before the initiations are expected to arrive. Its 3.5 per cent return from the IPO is about half of the average for this month’s other offerings.

Bullish calls from analysts could spark a rally in the stock while cautious commentary could send the shares below the $17 offering price for the first time. Short interest represents 6.1 percent of the stock’s float, according to data compiled by IHS Markit Ltd.

Cushman and Wakefield manages about 3.5 billion square feet of commercial real estate and has 48,000 employees in 70 countries. The company is backed by private equity firms including TPG and PAG Asia Capital. Its first quarterly report as a public company is expected September 5th after the market closes.