Site for 255 homes near Newbridge on sale for €4m-plus 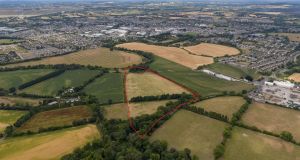 The site on the Great Connell Road outside Newbridge, the largest town in Co Kildare

A 20-acre site zoned for a residential development on the outskirts of Newbridge, Co Kildare, is expected to make in excess of €4 million when it is offered for sale by private treaty through Jordan Auctioneers.

The site on the Great Connell Road does not have planning permission but has the capacity for 255 homes close to the town centre.

Newbridge is the largest town in Co Kildare, with a population of more than 22,700. It is an important commercial centre 48km from Dublin and within easy reach of several commuter towns, including Kildare, Celbridge and Maynooth.

Paddy Jordan of Jordan estate agents said he was expecting strong interest in the site, which is zoned residential in the Newbridge Local Area Plan. The town was acknowledged as the commercial capital because of its excellent transport links, including a motorway and mainline and commuter rail services as well as private and public bus networks.