Bombardier sale, Barclays capital injection and how the INM deal was done 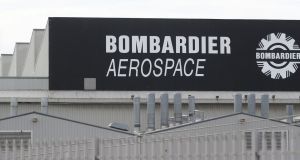 For Sale: The Bombardier plant in Belfast. Photograph: PA Wire

Trade unions at Bombardier’s Belfast operations have been in touch with potential buyers for the facilities, writes Francess McDonnell. Bombardier said on Thursday that it wanted to offload its Belfast business, which employs 4,000 and makes a major contribution to the North’s economy. We gauge political and union reaction to the decision, which the company says is not related to Brexit. Francess also explains how rooted Bombardier is in the North’s economy.

The Department of Finance has played down the significance of weaker -than-expected income tax and VAT receipts in the latest exchequer returns, reports Eoin Burke-Kennedy. The slight undershoot was due to technical and timing factors rather than a slowdown in the economy, according to the department.

Barclays injected up to €2.6 billion of capital into its Barclays Bank Ireland unit over the course of 2018 and the first few months of this year as part of Brexit preparations, with shareholder equity at the Irish entity soaring above €1 billion. Joe Brennan has the story.

Along with Mark Paul, Joe also takes an in-depth look at how this week’s Mediahuis deal to take over Independent News & Media was agreed and executed. The proposed transaction, they write, had its genesis more than two years ago. They also identify the individuals who brought the agreement over the line.

This week’s Business Interview features Colm Hannon, chief executive of Adare Manor. He tells Ciarán Hancock what it’s like to work with JP McManus, having been around the billionaire since being hired to run Sandy Lane in Barbados in 1996.

John FitzGerald is concerned this week about the current account of the balance of payments, which he uses to help consider what kind of position the Government should take in its next budget. A lot, he writes, depends on how Brexit plays out.

In Caveat, Mark Paul argues that parents should be allowed to share leave between them when a baby is born, rather than the official six months being allocated to the mother alone. He also acknowledges his own inability to breastfeed.

Olive Keogh looks this week at the world of apprenticeships, which she finds to be vibrant, with programmes now available in careers including finance and engineering as well as hospitality and construction.

1 Belgium helps Ireland to a Brexit boon
2 ‘My rent here is so low it’s a joke’
3 New Powerscourt Springs hotel to open in defiance of virus gloom
4 This charming man: how Paschal Donohoe won the Eurogroup presidency
5 Can Grafton Street stop the flood of closures?
6 ‘Sad day’ for House of Ireland as tourism retailer goes out of business
7 Goodbody’s planned €155m sale to Bank of China falls through
8 Goodbody loses a second suitor as Bank of China deal falls through
9 Pharmaceutical industry signals it won’t extend drugs agreement
10 Donohoe’s new role puts State at centre of debate over EU’s future
Real news has value SUBSCRIBE