Unite calls for Stormont return to deal with Bombardier sale 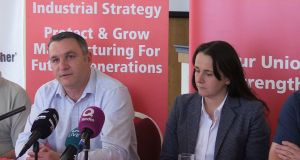 The Unite trade union on Thursday called on Stormont politicians to restore devolved government in the North after Bombardier announced it is to sell its Belfast operations.

At a press conference in north Belfast, Unite regional co-ordinating officer Davy Thompson said, “The reality is when investors come looking they want a stable government”.

“The politicians have a real role to play,” he added. “They need to get Stormont up and running.”

Mr Thompson also said he was confident there would be no shortage of viewers interested in the business and that he does expect a “quick process” but until Brexit is resolved people “won’t be able to tell what kind of investment they would be able to attract”.

“They need to put in place a manufacturing strategy,” he said of politicians.

He said the vacuum created by the absence of a Stormont government since January 2017 needs to be filled by politicians.

“We need to move forward,” he said.

DUP leader Arlene Foster described Bombardier, which employs some 4,000 people in the North, as “an integral part of the Northern Ireland economy”.

“It is welcome that there have been no workforce implications in relation to this announcement and both staff and the company can be assured of any support locally or in London which might assist them at this time,” she said.

Ms O’Neill said her party will meet the head of the civil service in the North and the Department for the Economy “to discuss what can be done to help find a buyer in order to protect the jobs at the Belfast plant”.

“We need a strong manufacturing strategy and robust intervention to future proof the industry and its skilled workforce,” he said.

“Not least of all with the threat of Brexit to business here. That can only be done with a functioning government. It’s time for politicians to get back to work, to deliver a government that can address these issues.”

UUP MLA Steve Aiken said without a devolved administration and manufacturing or industrial strategy, “there is a lack of vision for the future”.

“If ever there was a need to get the devolved administration to be back up and running and to support our manufacturing sector, it is now,” he added.

Alliance Party leader Naomi Long said the focus must be on finding a buyer committed to maintaining and developing manufacturing on the Belfast site “to secure not just Bombardier jobs but those reliant on being part of the company’s supply chain across Northern Ireland”.

“As Northern Ireland’s largest private sector employer and manufacturing company, we must do everything possible to ensure that a suitable buyer is found,” she said.

“The standout reputation of Bombardier’s Belfast operations augers well for attracting the right buyer,” she said.

“What’s clear is that this decision to sell is no reflection on the excellent performance of the Belfast plant employees.

“Bombardier are committed to finding a buyer that will continue to invest in the Belfast-based business over the long-term and support the Northern Irish economy.”