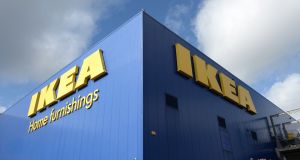 Ikea had sales in the Republic of €181.5m in the year to the end of last August. Photograph: Dara MacDónaill/The Irish Times

Ikea has changed its management structure for Ireland and Britain, which has resulted in the transfer to the UK of its former country manager for the Republic and the appointment of new executives with responsibility for this market.

The Swedish flat-pack furniture giant has rejigged the structure to divide Britain and Ireland into four distinct zones: North, South, Midlands and London, each with their own market area manager.

It has also appointed Swedish executive Peter Jelkeby as its new overall country retail manager for Ireland and Britain. He replaces Javier Quinones, who has moved to the US to head up Ikea’s operation there.

German-born executive Claudia Marshall, who took over as the market manager for the Republic in the summer of 2017, has moved back to Britain as one of the four zonal market area managers.

She will take on the South area, which is based in Reading and covers that area and other urban centres such as Bristol and Exeter.

Ireland now falls into the North zone, which also includes Scotland. Its new market area manager is Mike Hawkins, who was previously the Ikea store manager in Warrington.

Mr Jelkeby was formerly an Ikea executive for 20 years in Sweden, Russia, Vietnam and the UK and Ireland. He left the group and was most recently working for Swedish hardware chain Clas Ohlson before rejoining Ikea to take on his new role.

Ikea had sales in the Republic of €181.5 million in the year to the end of last August, mostly attributable to its flagship at Ballymun in Dublin. It also operates a click and collect store in Carrickmines.