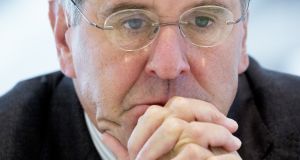 Stephen Moore, visiting fellow at the Heritage Foundation and former candidate for the US Fed. Photograph: Bloomberg

Stephen Moore has withdrawn his candidacy for a seat on the Federal Reserve’s board of governors, US president Donald Trump has announced.

The bulletin came after the former Trump campaign adviser’s prospects of clinching confirmation in the Senate foundered because of opposition from a number of Republican politicians.

On Twitter, the president said Mr Moore was a “great pro-growth economist and a truly fine person”. He added: “I’ve asked Steve to work with me toward future economic growth in our country.”

Steve Moore, a great pro-growth economist and a truly fine person, has decided to withdraw from the Fed process. Steve won the battle of ideas including Tax Cuts....

The decision marks the second time in under two weeks that a Fed candidate backed by Mr Trump has had to step back because of personal controversy.

Who is the other one?

Herman Cain, a former contender for the Republican presidential nomination and pizza executive, pulled out of the running last week. He complained he would have had to take a pay cut if he had taken up the seat and would have lost public influence. Mr Cain faced a tough confirmation process in the Senate because of past allegations of sexual harassment, which he denied.

Mr Moore’s candidacy had also been shrouded in controversy. A former economic adviser to Mr Trump’s 2016 campaign, Mr Moore has been forced to defend past writings dismissing female athletes’ attempt for pay equality with men, and comments describing parts of the US midwest as “armpits of America”.

Republican senator from Iowa Joni Ernst said this week it was “unlikely” she would support him, adding to previous comments in which she said she was “not enthused” about his candidacy because of his writings. – Copyright The Financial Times Limited 2019