Barclays injects €2.6bn into Irish unit in preparation for Brexit 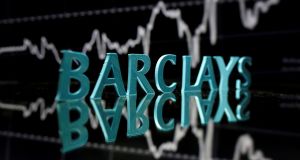 Group previously outlined that it would double its workforce in Dublin to 300 this year. Photograph: Dado Ruvic/File Photo/Reuters

Barclays injected up to €2.6 billion of capital into Barclays Bank Ireland over the course of 2018 and the first few months of this year as the unit prepared to become the British banking giant’s European Union hub in advance of Brexit.

Dublin-based Barclays Bank Ireland saw its shareholder equity soar almost 300 per cent to €1.25 billion last year, mainly as its immediate parent committed fresh capital to the business, according to figures contained in the lender’s newly filed annual accounts with the Companies Registration Office.

In addition the Irish unit received €1 billion of equity contributions and a net €500 million subordinated debt investment from its parent in the first 10 weeks of this year, according to the report.

The London High Court gave Barclays permission in January to move some £166 billion (€193.5 billion) of assets to the group’s Irish subsidiary in order to have a business in the EU that would be able to maintain access to clients across the EU after Brexit.

The scale of the Irish operation, which the group had flagged would hold a total of £207 billion of assets, has made it the biggest bank in the Republic and brought it under the direct supervision of the European Central Bank. The Irish unit is likely to have received additional capital from its parent after the annual accounts were signed off on March 13th.

The group previously outlined that it would double its workforce in Dublin to 300 this year, having moved into new offices at One Molesworth Street in Dublin recently.

The figures for Barclays Bank Ireland for 2018 offer a glimpse of a more domestically focused company than the one it has become in recent months. However, they do include first-time contribution from the unit’s takeover in December 1st of certain activities of Barclay Bank’s German branch.

Profit after tax for the unit dipped to €20 million from €22.5 million in 2017, with an increase in income more than offset by additional costs tied to the expansion of the business.

“[Last year] was another strong year for the corporate bank in Ireland, which continues to capitalise on Barclays’ recent investment in a significantly enhanced digital corporate banking platform,” a spokesman said.

“During the year the bank was active across a range of sectors, including manufacturing, consumer and real estate. The private bank and overseas services also experienced positive growth, during the financial year.”