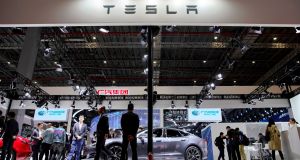 Tesla’s shares have plunged almost 30 per cent this year as investors have become significantly more bearish on the one-time high flyer. Photograph: Reuters

Tesla on Thursday unveiled plans to raise up to $2.3 billion (€2 billion) in a sale of stock and bonds after it burnt through more than $1 billion (€890 million) in cash at the start of this year.

The California-based company said it would offer $650 million (€582 million) in common stock and $1.35 billion (€1.21 billion) worth of convertible bonds as part of the offering. The proceeds of the deal would rise by $300 million (€268 million) if underwriters exercise an option to purchase additional securities. Elon Musk, Tesla’s chief executive, will purchase $10 million (€8.9 million) of stock as part of the fundraising.

Proceeds from the offering will be used to bolster the group’s balance sheet and for “general corporate purposes”, Tesla said.

Tesla had been under pressure from Wall Street to raise fresh capital. However, Mr Musk had long insisted that such a move was not necessary.

He reversed course last week, saying he thought there was “merit in raising capital at this point”. Tesla burnt through $1.5 billion (€1.3 billion) in the first three months of this year, while it also swung back into a net loss over the period.

Tesla’s shares have plunged almost 30 per cent this year as investors have become significantly more bearish on the one-time high flyer. Analysts have flagged a wide range of concerns, spanning from a potential fall in demand for its electric vehicles to the reduction of US tax credits that had been a boon to the customers.

The group’s bonds that Tesla is selling as part of the sale are convertible into cash and/or shares at the group’s election, it said.