Six large-scale applications put to planning board, with majority in Dublin 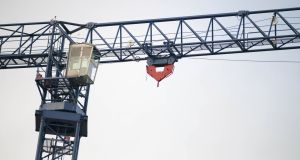 The rush by developers to build apartments in Dublin and other large urban areas continues with applications for more than 1,200 apartments put before An Bord Pleanála over four days.

One of the country’s largest builders, Glenveagh Homes, is leading the charge with two separate applications for 527 apartments at two locations in Dublin among the six large-scale applications made over the four working days last week.

The builder has put before the planning board plans to construct 473 dwellings, including 353 apartments, at Citywest and 174 apartments at Hearse Road, Donabate, the latter in place of plans already granted permission for 35 houses and 62 apartments at the location.

The applications are under the Government’s Strategic House Development (SHD) regime and follow plans for 2,600 dwellings – mainly apartments – put before the appeals board in the week prior to the new tranche of applications.

Elsewhere in the capital, Dundrum Retail Partnership has signalled its intention to seek planning for 109 apartments in Dundrum, while the Davy Platform ICAV has lodged details of plans to construct 222 apartments on a site at Finglas Road in Dublin.

Viscount Securities is to seek planning for 197 apartments to replace an existing permission for 56 apartments at Clay Farm, Ballyogan Road, Dublin 18.

Outside the capital, Westar Investments has told the planning board that it intends to construct 300 dwellings – comprised of 158 apartments and 142 houses at Clane, Co Kildare.