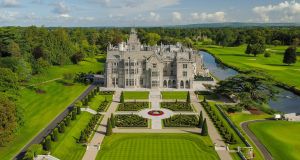 Adare Manor and Golf resort. No expense was spared on Adare Manor’s renovation, which cost somewhere between €50 million and €100 million, depending on which report you read Photograph: Murray Consultants

“My commute is about 2½ minutes,” says Colm Hannon with a broad grin as he surveys the lush lawns of Adare Manor and the perfectly manicured adjoining championship golf course.

It’s a line he uses with friends from Dublin when they complain about traffic congestion in the capital.

Hannon is chief executive at Adare Manor in Co Limerick, a five-star luxury hotel and golf resort owned by wealthy local businessman and horse race owner JP McManus and his family. He lives just a short distance from the magnificent 840-acre estate, which reopened in November 2017 after an 18-month closure.

No expense was spared on Adare Manor’s renovation, which cost somewhere between €50 million and €100 million, depending on which report you read.

The superb fit-out and extension of the manor and the high-end spec of its ancillary facilities suggest it was closer to €100 million but Hannon is coy about the precise figure.

“That’s a number that we don’t talk about but it doesn’t take a genius to walk around here and see the money that’s been spent on the place. It’s a significant investment. The objective from the outset by the owners was to do this right from the beginning. No compromising, make it something that would stand the test of time. They didn’t take any shortcuts.

“They did it right and that was the guiding force from the beginning. Certainly for the investment that went in versus the return that comes back. There was a long-term view on what was being created more than getting something that would generate a return on investment.”

Making a return on such a large capital investment in a small market like Ireland is extremely difficult and Hannon’s riding instructions are essentially for the hotel to generate enough income to wash its face each year for it to become self sustaining on an annual basis.

“If the place can make enough every year to pay for capex [capital expenditure] and upgrades, to keep improving and keep refining then that is sufficient from the ownership perspective,” he explains.

Hannon says the McManus family’s motivation in investing in Adare Manor was to create something that’s “really special for this region” to put Limerick and Munster on the map.

Hannon has worked with McManus since 1996, when he was hired to run the five-star Sandy Lane resort in Barbados, in which McManus is a co-investor with Dermot Desmond, John Magnier and Derrick Smith.

He combines his role at Adare with overseeing McManus’s interests at Luttrellstown Castle (best known as the wedding venue for Posh and Becks) near Castleknock in Dublin, which is co-owned by fellow racing magnate Magnier. And he is on the board of Sandy Lane.

“I was running a hotel in Bermuda and the guys had just bought Sandy Lane. They were looking for someone to come on board to do the final [pre]closure season and then to go into the whole redevelopment of it. They wanted someone who had done openings and renovations and understood the Caribbean market. I had been in Bermuda for 3½ years and in Antigua for a year before that.

“I met with them. Dermot headed up the selection process. I stayed there for 8½ years and when I returned to Ireland [in 2005] I stayed with them and I looked after Luttrellstown Castle as well.”

He visits Luttrellstown about once a month but is on the phone to the management several times a week and attends board meetings on a quarterly basis.

Adare Manor dominates his working week and his move to the area from Clonee in Co Meath reflects this. It reopened amid much fanfare in November 2017 following its multimillion euro makeover, which added a new wing and several bedrooms, delivered a Tom Fazio-designed golf course, a driving range on a par with Augusta, home of the Masters, two three-bedroomed garden cottages, eight manor lodges, 46 villas and more besides.

And it has what must be the smartest clubhouse in Ireland. “It’s got to be one of the most special all right,” says Hannon, with a fair degree of understatement as we tuck into lunch. “It’s more of a local dining venue than a clubhouse. People come in here and you wouldn’t even know you’re in a [golf] clubhouse. We took a decision not to put members boards all over the place and photos of golf. That can turn some people off.”

The kitchen serves American rib-eye steak, a nod to the fact that some 58 per cent of Adare Manor’s guests are from the United States. “A lot of the American guests expect USDA beef, that’s why it’s on the menu. It’s a really good quality cut.”

Strong growth in visitor numbers to Ireland from North America has been a boon for Adare Manor, which has revised upwards its forecasts on occupancy and rates from estimates at the time of its reopening.

“The Fazio link with the golf course was another big catch,” he says. “A lot of the premium golfing market that would not have come here in the past, now they have us on the radar.”

Hannon is hoping to really grab the attention of the American golf market by winning the race to host the Ryder Cup in 2026. Adare Manor faces competition from venues in the United Kingdom, Germany and Spain to secure the plum role as host.

“Ultimately, the European Tour decide. They’ve been out here and inspected the facility, they’ve looked at the hotel, the golf course and all the infrastructure,” he says.

According to Hannon, the Fazio-designed course is “Ryder Cup ready”, and wouldn’t require a major upgrade to host the Europe-USA golf match.

“Fazio was given a brief to design a golf course that was tournament ready, and he did. Behind every green there is space to take grandstands, there’s a road network going all the way around, there’s conduit running for fibre all the way around. We’ve made the investment already to get it ready.”

Adare Manor currently has just under 200 members of its golf club, paying €6,500 in fees per year and has a cap of 15,000 on the number of rounds that can be played on the course each year – some other Irish courses allow 25,000. The golf course closes for two months during winter to protect the grass and to spare the ground from wear and tear. Caddies are compulsory for those just paying the premium green fee to play the course.

What’s the benefit of hosting the Ryder Cup? “First and foremost is the prestige and the recognition you get as the host of the Ryder Cup. In terms of the practical terms, if there’s a Ryder Cup announcement made, let’s say by June this year, every American golfer that comes to Ireland between now and 2026 is going to have the course on their tick list.

“If we can manage that right . . . and get our own marketing and business model together, you’d like to think it could continue beyond that. And hopefully when people come to play here they will want to stay in the hotel as well.”

Ireland hosted the Ryder Cup once before, at Michael Smurfit’s K Club in Kildare in 2006. That was just a couple of years before the economic crash here and its fair to say the K Club never reaped the full dividend of hosting the prestigious event.

“Ultimately it could leave a legacy for golf thereafter. Encourage more golf business to the country,” says Hannon.

Adare Manor will host the sixth JP McManus Pro-Am in July 2020, which will feature a range of the world’s top golfers (Tiger Woods and Rory McIlroy are expected to tee off), celebrities (Hugh Grant and Mark Wahlberg) and business people. Crowds of 40,000-plus a day are likely and the event will raise millions of euro for local charities. The five previous stagings raised €140 million between them.

“It’s one of those events that people love. It’s €50 for a two-day cap, that’s your entry fee. It’s good value for two days’ golf.”

Hannon plays golf but won’t be teeing off himself. “I’m chairman of it. It’s a busy two days for me. I’ll be on the golf course but won’t be holding any clubs.”

He also “absolutely” has his eye on a Michelin star for its Oak Room restaurant in the main house, although he’s aware of how difficult it can be to secure one. “You never know with Michelin. They don’t give you the A-Z as to why you don’t get it.”

With more than 60 chefs working at the resort and an extensive range of food available on the menus of its various restaurants, it has to be in with a good shout for a star in the near future.

Hannon says the Irish market has “bounced back” and Brexit is having minimal impact on the Limerick resort as less than 10 per cent of its business comes from the UK. “In terms of the geographical mix of guests, it’s not an issue but we do import products through the UK and there’s no question there’ll be an impact there. But we’re not as heavily dependent on the UK market as many other hotels in the country.”

Hannon had hoped to achieve average occupancy of 60 per cent in year one after reopening but exceeded this target with an average of 65 per cent. “This year we’ll go over the 70 per cent mark, which is great.”

He says May, June and September are its three busiest months and the average rate per night would be just under €500.

Hannon is crystal clear that Adare Manor’s renovation is down to JP McManus and his family. “Whenever JP is at home, he’s here. He’ll come and play golf and he’ll dine. He loves the place. It’s very important to him. All of the family are very keen to ensure that this is truly special. He doesn’t get involved in the day-to-day running of the place but he gives us feedback on anything he notices or observes.

He says the resort will be an inter-generational investment, passed on to other generations. “That’s very much how they see it,” he says.

What are they like to work for? “They have very high expectations but they are very fair people in all respects.”