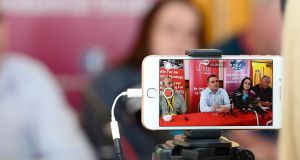 Unite’s Susan Fitzgerald said her union did not believe Brexit had expedited Bombardier’s decision to sell in Belfast. Photograph: Pacemaker

Bombardier jobs are “absolutely vital” to the Northern Ireland economy but it does not matter “whose name is above the gate” providing the jobs and skills that currently exist in the company can be retained in the North, union leaders have said.

Michael Mulholland, regional organiser for the GMB trade union in the North, said Bombardier’s decision after exactly 30 years to sell its entire operations in the North had been greeted with a “numbness at all levels”.

Mr Mulholland said although he had been concerned for a number of years about the long-term outlook for Bombardier the reality of its decision to sell its operations in the North was far-reaching not just for its immediate workforce but because of its dominant role in the Northern Ireland economy.

“Belfast has been caught in the middle of the global changes which have impacted on the aviation industry and while Bombardier is determined to put a company spin on this and maintain that it’s business as usual – mainly to protect their share price – this calls into question what the future will look like for Bombardier at Queen’s Island in east Belfast.

“It used to be that a job in Bombardier and before that in Short Brothers was a job for life but that hasn’t been the case for a long time. My own son works for Bombardier and since he joined four years ago he has seen a lot of people made redundant. Like many others he was hoping to build a future in Bombardier and he still is hoping to have a future there but it will depend now on whoever takes it over,” Mr Muholland said.

The GMB is adamant that there is a “Bombardier legacy” that must be protected in Northern Ireland.

“This is a very viable proposition for the right buyer,” Mr Mulholland said.

“But what we don’t want is an organisation who will come in and asset strip and erode 100 years of aircraft manufacturing in Northern Ireland. We have a vast skills base in Bombardier Belfast which designed and builds the composite wings for the A220 (formerly the Cseries aircraft). Bombardier Belfast builds and supplies the wings for Airbus and anyone can see it would be a very valuable asset for the right buyer,” he added.

“Bombardier could not operate without Belfast because of the way it has streamlined its business. It could simply could not sell Bombardier Belfast overnight because it needs what Belfast provides – it needs the key components that are manufactured in Belfast,” Mr Thompson said.

Bombardier Belfast’s current fundamental role within the Bombardier aerospace division is one of the reasons why Unite is optimistic that the operation will attract a buyer.

“It is a viable business and it has very established supplier relationships with other major aerospace groups like Airbus and we believe there could also be an opportunity to establish on going supply contracts with Bombardier in the future,” Mr Thompson said.

Unite is adamant that it “doesn’t matter whose name is above the gate” providing jobs and skills are safeguarded in Belfast.

Susan Fitzgerald, Unite’s regional co-ordinating officer who has responsibility for the Bombardier workforce in the North, said the Belfast plant produces “world-class products and has a world-class workforce”.

She said the union had already been in contact with potential buyers and had also had discussions with the UK business secretary Greg Clark to secure commitments from the British government that it would safeguard jobs and skills across Bombardier’s sites in the North.

Unite does not believe that Bombardier’s decision to sell its Northern Ireland operations has been fast tracked because of Brexit despite the Canadian group’s repeated warnings about the impact Brexit could have on its business.

“This decision had nothing to do with Brexit, this has been in the planning for some time.

“Bombardier may have decided to sell the family jewels and there is uncertainty but we will be watching the sale process very closely to ensure workers and skills in Northern Ireland are protected,” Ms Fitzgerald added.