Aerospace giant has announced plans to sell the NI business which employs 4,000 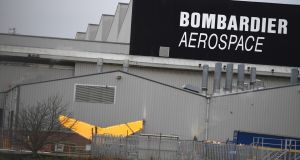 Trade unions at Bombardier’s Belfast operations have been in contact with potential buyers after the Canadian aerospace giant announced plans to sell the Northern Ireland business which employs 4,000.

Unite’s regional co-ordinating officer Susan Fitzgerald said the union had also had discussions with the UK business secretary Greg Clark to secure commitments from the British government that it would safeguard jobs and skills across Bombardier’s sites in the North.

Bombardier made the announcement just before lunchtime on Thursday on the day people in the North were casting votes in local elections.

The Canadian group said it plans to sell its factories in the North and Morocco as part of a strategy to consolidate “all aerospace assets into a single, streamlined and fully integrated business” in North America.

Industry observers have identified Airbus as a potential buyer of the five plants in Belfast which make wings for the Airbus A220, previously known as the Bombardier C-Series. Airbus owns 50.5 per cent of the Belfast A220 programme.

An Airbus spokesman said the group “does not comment on speculation or market rumours”, but said it did not anticipate “any impact on A220 production”.

The biggest players in aircraft parts include US-based Spirit AeroSystems and Triumph, as well as Britain’s GKN, which was acquired last year by Melrose Industries.

JPMorgan Chase analyst Seth Seifman noted in a report to clients that Spirit had said on Wednesday that it was looking for acquisitions to diversify away from its dependence on Boeing. Spirit made no comment on Thursday.

Bombardier’s Belfast management said in a statement: “We understand that this announcement may cause concern among our employees, but we will be working closely with them and our unions as matters progress, and through any future transition period to a new owner.”

The Canadian company has been present in Northern Ireland since 1989.

1 Objectors stall production of enough timber for 5,000 houses
2 Revised help-to-buy scheme opens for applications
3 Shed Distillery in Leitrim to open €3m visitor centre next month
4 Urban micro-farm growing vegetables in heart of community
5 UK tips into deepest recession on record after 20% contraction
6 Moving in and out of lockdown is a recipe for economic disaster
7 AIB concedes Covid mortgage policy was ‘regrettable’
8 General Motors deprived of rising star after CFO’s surprise move to Stripe
9 Glanbia sees sharp decline in earnings due to Covid-19 crisis
10 ‘No demand... because there are no people’ at well-known Dublin pub
Real news has value SUBSCRIBE