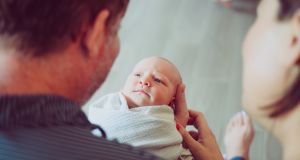 If a mother wants to return to work after a few months so her partner can stay at home until the leave is used up, what business is it of the State to interfere in the efficiency of that choice for a couple? Photograph: iStock

‘Are you able to breastfeed?” she asked. Excuse me? It’s not every day male business journalists get asked this question at the launch of a research report. I glanced down at my chest, looking for any hint of mammarial evidence that might have prompted her query. Granted, I’m not as skinny as I used to be, but things aren’t yet that bad.

Feeling reassured, I looked up again and the “excuse me” departed my slightly stunned brain and emerged from my mouth into the microphone I was holding.

We were at Wednesday’s launch by Solas, the State training agency, of a study about the potential availability of women who work in the home to enter the workforce. I was helping to chair a panel discussion, and my inquisitor from the floor was Irish Congress of Trade Unions social policy officer, Laura Bambrick.

“Can you breastfeed, Mark?” she repeated. Of course I can’t breastfeed, because as everybody can see, I am not adequately equipped and nor could I be.

The launch of the study, by Solas analyst Joan McNaboe, was held in conjunction with Dress For Success, the workplace gender equality advocacy group fronted by television fashionista, Sonya Lennon. The discussion around McNaboe’s excellent research – which found that most women working at home don’t want a job anyway – had inevitably strayed into a lively but healthy debate about the structural issues that prevent some women from entering the workforce on an even keel with men.

Minutes earlier, I had posited the (I thought) uncontroversial opinion that my wife and I should have been allowed to carve up her maternity leave between us upon the birth of our last child. My wife received an initial six months’ maternity leave, which was extended by two months with holidays. I took just a few weeks.

If we are trying to tackle the notion that a woman’s place is in the home and a man’s is at work, then why not have the option, to deploy as we so chose, for me to take a slice of her leave to care for the child at home while she returned to work? No net cost to the economy as a whole. Better choices for couples. Less workplace demarcation between the treatment of men and women. Obviously, the same arrangements could be enjoyed by same-sex couples with a child.

Bambrick’s point, expressed via her slightly studs-up question about what I might be hiding under my shirt, was that the six months of statutory maternity leave for mothers is meant to facilitate breastfeeding. Why should a father be allowed to share this leave with the mother if he has no breasts with which to feed? This time is set aside for women. Lobby for additional time for fathers, if they want it.

The first possible retort is that I was suggesting the option, not a diktat. The second is that a mother doesn’t necessarily have to be off work for, usually, more than half a year – as if she is seriously ill – just to breastfeed. At least not in the later stages of her leave (it is obviously a completely different scenario in the initial weeks and months, when the baby is feeding constantly).

Provisions already exist in law that employers must allow nursing mothers short breaks in which to breastfeed at work. In the fourth, fifth or sixth month of the baby’s life, why couldn’t a stay-at-home-for-now father simply show up at his partner’s workplace at arranged times, baby in tow, to facilitate this?

Nursing mothers can also express their milk for feeding by bottle by their partners, and many do so. There’s a plethora of practical ways around the seemingly irremovable roadblock suggested by Bambrick. If a mother wants to return to work after a few months so her partner can stay at home until the leave is used up, what business is it of the State to interfere in the efficiency of that choice for a couple?

Someone else suggested the answer is to retain the six months legally set aside for women, and add on a further six months entitlement for men. There you have it. Parity. Problem solved, right?

A dose of cold reality was later injected into the conversation in a contribution from Siobhán Masterson, the head of corporate affairs at employers group Ibec. It’s all very well “solving” problems by doubling the entitlement to this or trebling the entitlement to that, she basically argued, but you can’t ignore that all of this comes at a financial cost that must be borne.

If you double the gross leave entitlement for the parents of every newborn child, how would the economy cope with the cost of this when the next downturn inevitably arrives? The answer to every quandary cannot always be to spend more, more, more. There are two sides to a ledger, even if you choose to see only one of them.

It may be illegal and also morally wrong, but it is still a fact that some women are treated less favourably to men at the hiring stage, because the prospective new employer looks at her and thinks: I’ll hire the bloke out in the waiting room, because I can be certain that he won’t take months off when a baby is born.

A culture of shared birth leave would help to weaken the incentives for unscrupulous employers to make such decisions.

And for women who are angry at workplace discrimination in favour of men, but who, at the same time, accept the maintenance of some of the obvious causes of that discrimination, consider this: sometimes you have to give a little to get more back.

1 In six months we will be in the grip of a 1980s-style recession
2 Angela Merkel sweeps in to save the euro zone
3 Property price drop of up to 12% this year a ‘reasonable’ assumption – McDonagh
4 Mortgage approvals tumbled in first full month of lockdown – BPFI
5 Cork-based AI supply chain company Keelvar raises $18m
6 Ryanair to process all Covid-19 refunds within 10 weeks, Michael O’Leary says
7 Facebook looks increasingly immoral and thoughtless
8 Chartered Land moves closer to approval for Dublin’s tallest tower
9 Ibec warns ‘conservative’ lifting of lockdown will make downturn worse
10 Cycling made easier with an Irish-made electric bike
Real news has value SUBSCRIBE