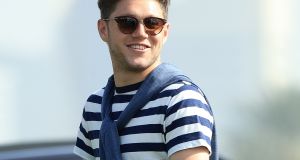 Singer Niall Horan had a s hare in a $2 million (€1.71 million) pay package from his main Irish firm.

It was a big night for Big Tech last night, with Apple, Google, Amazon and Facebook all posting strong quarterly results despite turbulent politics and the coronavirus pandemic. Tech companies worth a combined $5.5 trillion reported their earnings within minutes of each other after the closing bell in New York; read a summary of the results here.

Irish mortgage holders are missing out on thousands of euro in savings by not switching providers, according to a new study by the Central Bank of Ireland, which found 61 per cent of eligible borrowers could save more than €1,000 within the first year if they switched, and more than €10,000 over the remaining term of the loan. Eoin Burke-Kennedy has the details.

The coronavirus pandemic has hit the racing industry hard; bloodstock agent Robert J Goff says the Kildare-based company is expecting “a major downturn” in sales this year, in the region of 40-50 per cent. Eoin Burke-Kennedy reports.

Cancer patients can be left waiting years to secure optimal treatment for their condition, but diagnostics company Diaceutics has launched a new €26 million DXRX precision medicine platform, which it hopes will improve the efficiency of patient testing for a range of diseases, aiming to cut this time to mere months. Dominic Coyle reports.

The International Monetary Fund (IMF) has said the UK’s hopes of a V-shaped recovery will face serious headwinds from a second wave of coronavirus, warning that the economy will not return to pre-pandemic levels in 2021. The initial sharp economic rebound was also being hurt by rising unemployment and stress on corporate balance sheets, it said.

Across the Atlantic, the US economy grew in the third quarter at its fastest pace in postwar historyas activity bounced back from coronavirus lockdowns, offering an opportunity for Donald Trump to tout the economic recovery in his final pitch to voters ahead of Tuesday’s presidential election.

In related news, 93 per cent of members of the Institute of Directors in Ireland favour Democratic nominee Joe Biden for the White House, believing his election as president would lead to better trade relations between Ireland and the US than would be the case if Donald Trump won. Laura Slattery reports, while in Agenda, Cliff Taylor focuses in on the US election in more detail, examining the economic implications for Ireland.

Stripe has announced it is shifting payment processingfor the majority of its European customers to its Irish-regulated entity because of Brexit, writes Charlie Taylor.

In his column this week, John FitzGerald is writing about the need for the EU to show leadershipwhen it comes to cutting vehicle emissions, while in World of Work, Olive Keogh focuses on employee rights while working from home.

1 Admission of mistake in Oxford vaccine dose raises doubts over reliability
2 Move to EU or face disruption, City of London is warned
3 Cliff Taylor: Deal or no deal we are now heading for a hard Brexit
4 Last orders for Rí-Rá and Globe as Central Hotel gets green light to expand
5 Karlin Lillington: How I managed to cut my mobile phone bill by at least half
6 Fiona Reddan: Who’s afraid of Revolut? Not AIB and BOI it seems
7 German watchdog reports EY to prosecutors over Wirecard audit
8 Irish Life fund pays €49m for 94 Dalkey apartments
9 Lahinch Golf Club runs out of its own cash after €3m Covid-19 hit
10 Longboat Clinical acquired in multimillion euro deal
Real news has value SUBSCRIBE