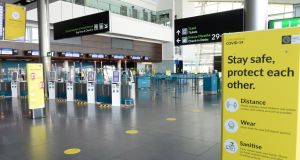 Ministers will decide on Tuesday on implementing an EU travel plan meant to cut the need for quarantines and self-isolation.

Dubbed the “traffic-light system” because it classes regions as green, orange or red, according to their Covid-19 infection rates, EU foreign ministers last week agreed that the bloc should adopt the new approach.

The Government had already committed to adopting the system, and the Department of Transport confirmed that the Cabinet would agree on its implementation at its meeting on Tuesday.

The Cabinet could decide to ditch quarantine measures for those travelling here for essential business or family reasons, reports last week said.

Airlines want governments to allow free movement for those travelling from green and orange areas, with tests replacing quarantines and self-isolation for those from red regions.

However, foreign ministers left it open to individual member states to decide on applying their own restrictions to those travelling from red and orange regions in a move the aviation industry condemned as a fudge.

Few regions in the bloc now have low enough Covid rates to qualify as “green”, which requires 14-day infection levels of 25 or fewer people in every 100,000, or 50/100,000 where positive test results are below 4 per cent. Only parts of Germany, Italy and eastern Europe qualify.

Currently all travellers arriving into the Republic – barring those from the North – are asked to restrict their movements for 14 days. This does not apply to anyone from so-called “green” list countries. However, for the last two weeks there are no states on the Republic’s “green” list.

Airlines fear that the Government will stick with its broad restrictions, the most stringent in the EU, for travellers from orange and red regions.

Ryanair last week closed its Cork and Shannon airport bases for the winter months in the face of falling bookings.