European shares in the red as investors react to new lockdowns 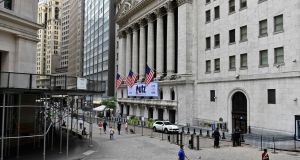 European stocks suffered their sharpest drop in five weeks as Germany announced a new lockdown to combat a surge in Covid-19 cases, while restrictions were also expected to be tightened in France.

The renewed curbs are expected to increase investors’ focus on European Central Bank president Christine Lagarde, who is due to speak on fiscal measures on Thursday.

The Iseq finished its session down 2.7 per cent, after clawing back a portion of the day’s losses at the close. Ryanair was one of the heaviest fallers, plummeting 5.3 per cent to €11.52 as airlines across Europe sank amid fears that travel restrictions and lockdowns may continue.

Bank of Ireland rose 1.3 per cent to €1.98, having initially dropped after a management update revealed it would take a €169 million charge to pay for a voluntary redundancy programme that will see 1,700 employees leave the bank. It also signalled that new lending rebounded in the third quarter.

London’s FTSE 100 fell to its lowest level in six months as investors dumped riskier assets on fears of more lockdowns.

Dragged down by losses in real estate and travel stocks, the blue-chip FTSE 100 index was down 2.55 per cent while the mid-cap FTSE 250 index slid 1.9 per cent as banks, industrials and retailers declined.

Some stocks managed to overcome the prevailing gloom. Aero-engine maker Rolls-Royce soared 12.5 per cent a day after shareholders approved a £2 billion rights issue to bolster its finances.

Fashion and homewares retailer Next rose 0.7 per cent after it upgraded its full-year profit outlook on better-than-expected quarterly full-price sales, and Kaz Minerals jumped 10 per cent after it agreed to be acquired by a consortium led by its chairman in a £3 billion deal.

The Stoxx 600 index fell 2.95 per cent, with German shares suffering their weakest day since early June as its government agreed on an emergency lockdown to combat surging Covid-19 cases. The Dax plunged 4.2 per cent in Frankfurt, while in France, the Cac 40 closed 3.4 per cent lower. Italian stocks fell 4.1 per cent and the Spanish market declined 2.7 per cent.

All sectors in Europe were firmly in the red, with the economically sensitive autos sector leading losses, down almost 5 per cent. Renault plunged 8 per cent in Paris, while German automaker Volkswagen declined 4 per cent.

The downbeat mood overshadowed a batch of positive quarterly results from European companies, with Deutsche Bank dropping 1.9 per cent and French retailer Carrefour nudging down 0.1 per cent despite upbeat results.

Surging Covid-19 cases led to further volatility on Wall Street, where investors were simultaneously unnerved by the absence of an agreement on a stimulus package just a week ahead of the presidential election.

The S&P 500 Index fell about 3 per cent amid a surge in Covid-19 hospitalisations. Energy shares and technology stocks were among the worst performers.

Boeing slumped to a one-month low as it announced plans for more job cuts. Microsoft was among the biggest drags on the S&P 500 as investors focused on a forecast that fell short of analysts’ highest projections, looking past a decisively upbeat profit and sales report.