Goffs expecting sharp slide in horse sales due to Covid-19

Kildare-based organisation generated €1.5m profit in the 12 months to the end of March 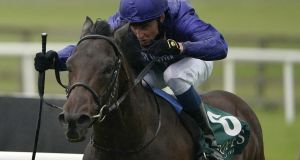 Bloodstock agent Robert J Goff says the company is expecting “a major downturn” in sales this year, in the region of 40-50 per cent, as a result of the coronavirus pandemic.

The disease has played havoc with the horse industry here and in the United Kingdom, triggering a significant decline in demand while disrupting sales and racing events.

Kildare-based Goffs has been forced to relocate or delay most of its big sales this year as a result of the Covid-19 quarantine rules, which hampered overseas buyers from attending events in Ireland.

Chief executive Henry Beeby said its flagship yearling auction, the Goffs Orby Sale in September, which was held in the UK instead of Kildare, recorded a 44 per cent slide in sales on the previous year.

“This is roughly what we’re anticipating [in terms of turnover] for the year,” he said.

According to its latest company filings, Goffs generated a profit of €1.5 million for the 12 months to the end of March this year, a decline of 33 per cent on the previous year.

The decline was linked to several once-off payments related to the development of a nearby hotel on Goffs Avenue, a defamation case and increased debt provisioning arising from the Covid-19 crisis.

Turnover for period rose by 5 per cent to €175 million.

Mr Beeby said the figures were largely a statement of affairs prior to the pandemic.

“We’re expecting and are experiencing a major downturn but we have been able to take swift preventative action and we’re well placed to ride out the storm,” he said, noting the group had taken “a very prudent” position on bad-debt provisioning.

He said thoroughbred horses were essentially a luxury item and therefore demand rises and falls with the strength of the economy.

In the company’s financial statement, Mr Beeby also highlighted the “looming spectre of Brexit” as another potential threat to the business, while noting there has been no discernible negative impact to date.

He highlighted the group’s major auctions last year, including the 2019 Goffs Orby Sale, which was responsible for the highest priced yearling in Europe (€3 million) for the second year running, and a quartet of horses each sold for €1 million.

“The new year is proving challenging in a way no one could have foreseen and we will have to deal with whatever we encounter as each new problem surfaces,” he said.

“However, Goffs is well placed to react and adapt in an open minded way as we have two world-class sales complexes on either side of the Irish Sea,” he added.

1 Admission of mistake in Oxford vaccine dose raises doubts over reliability
2 Move to EU or face disruption, City of London is warned
3 Cliff Taylor: Deal or no deal we are now heading for a hard Brexit
4 Karlin Lillington: How I managed to cut my mobile phone bill by at least half
5 An Post parcel volumes to hit weekly record of 3.3m
6 Longboat Clinical acquired in multimillion euro deal
7 Irish Life fund pays €49m for 94 Dalkey apartments
8 Fiona Reddan: Who’s afraid of Revolut? Not AIB and BOI it seems
9 Son putting elderly dad under pressure to sign over land
10 Foxconn to shift some Apple production to Vietnam to minimise China risk
Real news has value SUBSCRIBE