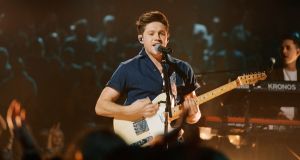 The continuing global success of Niall Horan allowed the Mullingar singer share in a $2 million (€1.71 million) pay package from his main Irish firm.

New accounts filed by Mr Horan’s Limerick-based Neon Haze Music Ltd show that the 27 year old shared and two fellow directors shared the bumper pay package after revenues at the business surged at the company by 53 per cent from $1.6 million to $2.46 million.

The figures show that pay to directors from the business last year increased by 77 per cent from $1.13 million to $2 million.

The other two directors are accountants to the stars, Alan McEvoy and Barry Downes from the Limerick-based Livewire Business Management. Horan would have received the bulk of the pay.

Mr McEvoy helped to oversee the finances of One Direction, the band in which Mr Horan made his breakthrough, and he is again an integral part of managing the singer’s growing wealth.

The pay to directors comprised fees of $49,500 and emoluments for other services totalling $1.95 million.

The main activity of the company is the provision of musical recording services and related promotional activities.

The accounts came through Companies Office this week days after Heat Magazine estimated that Mr Horan’s personal wealth to be a about £55 million. He ranks No 4 on their Richest Celebrities 30 and Under List.

Earlier this year, Mr Horan released his 2nd studio album, Heartbreak Weather although the outbreak of Covid-19 meant the singer did not proceed with his Nice to Meet Ya world tour this year.

The musician, who has amassed 40.6 million followers on Twitter, will play a live-streamed gig from the Royal Albert Hall in London on November 7th to raise money for his crew who have been out of work since the outbreak of the pandemic.

Addressing the Covid 19 impact from early 2020, a note attached to the accounts states that while the company “will work with the record label to adapt to the restrictions imposed here, there is no immediate or expected decline in turnover”.

Horan’s debut solo album, Flicker was released in October 2017 and debuted at number one in charts in Ireland, the US, Canada, Mexico. It also hit the top spot on iTunes in more than 60 countries.