Nine in every 10 members favour Joe Biden victory in US election, survey finds 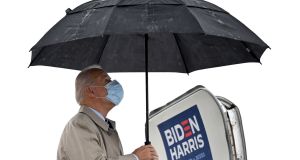 Some 93 per cent of the 323 members of IoD Ireland surveyed are in favour of Democratic nominee Joe Biden winning next Tuesday’s presidential election. Photograph: Jim Watson/AFP

The US presidential election, Covid-19 and ongoing trade talks between the EU and the UK represent a “triple jeopardy” for Irish business in the final quarter of 2020, the Institute of Directors in Ireland (IoD) has said.

Some 93 per cent of the 323 members of IoD Ireland surveyed are in favour of Democratic nominee Joe Biden winning next Tuesday’s presidential election, believing it will lead to better trade relations with the US than would be the case if Donald Trump stays in the White House for a further four years.

The latest quarterly director sentiment monitor from IoD Ireland also found that slightly more than half of the chief executives and other senior executives surveyed – 54 per cent – believe the EU and UK can still reach a trade deal before the end of the Brexit transition period on December 31st. Only 13 per cent felt the same way in the first quarter of this year.

But the rising optimism for a deal was offset somewhat by a downbeat assessment of the impact of Brexit on the Irish economy.

Some 91 per cent of IoD members expect Brexit will have a negative impact on the Irish economy in the short term, while 56 per cent say there will be negative long-term consequences. However, 84 per cent said they were either very well or sufficiently prepared for the UK’s departure from the EU.

“The next two months are going to be critically important for Ireland in terms of international trade, as well as multilateral and bilateral relations. The US election, the EU-UK trade negotiations and our direct relationships with the UK and, indeed, with the European Union, will all come into sharp focus and will have significant ramifications for businesses and corporations operating in Ireland,” said IoD Ireland chief executive Maura Quinn.

“Even without the presence of the Covid-19 pandemic, these would be uncertain times. Business leaders are very concerned about the impact of the individual and cumulative effects of this triple jeopardy on their businesses, and the wider economy.”