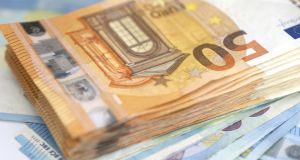 Covid-19 has had a dramatic effect on the economy, and Government ministers have warned the current level of spending is unsustainable if a vaccine is not found. Photograph: iStock

The nationwide move to Level 5 restrictions in an effort to contain the spread of Covid-19 continues to dominate headlines this morning. In our lead story, the Government’s two key financial Ministers warn that current spending is unsustainable in the longer term if a vaccine is not found, Jack Horgan-Jones writes.

It’ll come as news to no one that the Covid-19 pandemic has had a dramatic effect on employment, consumer spending and the wider economy, but new figures from the Central Statistics Office show just how stark the impact has been. Eoin Burke-Kennedy reports on the agency’s 2020 yearbook.

Economists have warned that GDP is now likely to fall again in the final quarter of the year and the unemployment rate will head back over 20 per cent due to the imposition of Level 5 restrictions, Cliff Taylor writes, while business groups are calling for added supports for companies forced to close once again, reports Ciara O’Brien.

All non-essential retail - including toy shops - will close from midnight tonight, but supermarkets will continue to sell all sorts of items, toys included. Aldi is expecting a run on its Christmas toys when they land in store on Thursday, and plan to impose customer quotas and store marshalls to keep the situation under control.

Struggling borrowers will be best served securing “individually tailored” easing of terms of their loans from now on, rather than banks offering blanket payment breaks again, Central Bank deputy governor Ed Sibley has said. Joe Brennan has more on this story.

The board of Aryzta is at odds over whether to continue to entertain a potential takeover bid from a unit of US activist hedge fund group Elliott Management, or start assessing approaches from almost 20 parties eyeing parts of the baked goods group, according to sources. Joe Brennan also reports on this story.

In her Money Matters column this week, Fiona Reddan asks, how long can the Government afford to keep the State pension age at 66?

In Commercial Property, Ronald Quinlan reports on the former Kellog’s headquarters in Swords going on sale for €7.5 million, and how Johnny Ronan’s Ronan Group Real Estate (RGRE) has secured US private equity group Oaktree as a joint venture partner for the development of the former Irish Glass Bottle (IGB) site in Dublin.

And finally, businesses have been encouraged to show how they are they are supporting the arts in the context of the Covid-19 pandemic ahead of this year’s annual Business to Arts Awards. Nominations are being sought for the awards ahead of a virtual ceremony which will take place in April from the GPO. The closing date for applications at businesstoarts.ie is December 16th.