NatWest CEO declines to give timeline for Ulster Bank decision 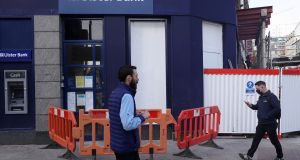 NatWest’s chief executive, Alison Rose, declined on Friday to give a timeline for a decision on the future of the British banking giant’s Ulster Bank unit in the Republic as the group issued a trading update to the stock market.

Ulster Bank reported a €275 million operating loss for the first nine months of the year, driven by €284 million of loan loss provisions as a result of the Covid-19 crisis, NatWest revealed in the statement. Still, it managed to eke out a €1 million profit in the third quarter as the quality of its loan book stabilised.

The Irish Times reported last month that NatWest, formerly known as Royal Bank of Scotland (RBS), is actively considering winding down Ulster Bank in the Republic. It comes as the pandemic has added to challenges facing the bank, which has been dogged for years by high costs and low profitability in an era of ultra-low central bank interest rates and muted loan growth.

Sources said at the time that the strategic review was also looking into alternative options, such as seeing Ulster Bank tie-up with another Irish lender, though this is said to be a less likely option.

Earlier this week, the chief executive of Permanent TSB, which has long been considered as a likely merger partner for Ulster Bank, poured cold water on the possibility of a combination, saying his focus is on the 75 per cent Government-owned lender’s own strategy.

When asked by reporters and analysts on conference calls on Friday about Ulster Bank, Ms Rose reiterated that NatWest was continuing to review the strategy of Ulster Bank “appropriately and responsibly” as it weighs the impact of Covid-19. In the meantime, the plan to grow the business “remains unchanged”. She declined to give a timeframe for a decision.

Ulster Bank has been allowed by the Central Bank to return €3.5 billion of surplus capital to NatWest over the past four years – the equivalent of about a fifth of its parental bailout bill during the financial crisis.

However, it is still being forced to hold a capital reserves ratio of about 28 per cent, double what most banks have as a target – and leaving as much as €2 billion of excess reserves in the Irish business.

When questioned about the level of “trapped capital” in Ulster Bank, Ms Rose, who is a year in charge of NatWest on Sunday, said she was looking at her role “clearly with a focus on capital allocation”.

The NatWest group, which on Friday reported that it had swung into a £355 million (€395 million) operating profit in the third quarter as it set aside lower loan-loss provisions, reiterated in its trading update that, in the event of any change at Ulster Bank, it will be “undertaken with full consideration of any impact on customers, colleagues and shareholders in the first instance”.

Ulster Bank has extended 17,000 Covid-19 payment breaks to customers affected by the economic crisis as of the end of September, with 46 per cent of those who have rolled off the initial three-month period of relief opting for a three-month extension.

These account 8 per cent of the bank’s loan book, according to the trading update.

NatWest did not provide details on the number of Ulster Bank borrowers coming off payment breaks who require further forbearance.