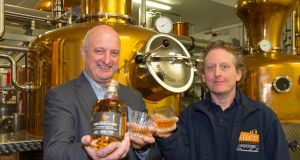 The Shed Distillery in Co Leitrim will on Tuesday launch its first batch of Irish whiskey almost five years after laying it down for maturation.

Speaking to The Irish Times, entrepreneur PJ Rigney, founder of the distillery, said some 12,000 bottles of its Drumshanbo Single Pot Still Irish Whiskey would be made available here in the initial launch, retailing at about €80 a bottle. It will be available in airport shops and a range of independent off-licences around the country.

“This is an historic moment for us,” Mr Rigney said. “It’s the first whiskey to come out of Connacht for more than 100 years. We’ll release 5,000 bottles in the Irish market this side of Christmas.”

The whiskey has matured for almost five years – longer than the three years and one day necessary by law for it to be called Irish whiskey.

“We only felt in the last two months that the quality was right to release it. A lot of people were surprised that we waited but we wanted to make sure it was right for a super-premium position in the market,” Mr Rigney said.

The Shed Distillery opened in late 2014 and employs 36 staff. It began producing Drumshanbo Gunpowder Gin in 2016 and is currently selling more than one million bottles of gin each year.

“We expect that growth to continue,” Mr Rigney said.

He is hoping to sell between 75,000 and 100,000 bottles of whiskey next year and says there is plenty of room at the Leitrim distillery to expand capacity in the coming years.

The market for Irish whiskey is highly competitive but Mr Rigney said his use of oats in the whiskey gives it a distinctive taste. “It’s a creamier taste and creates a differentiation. Our focus is on taste, innovation and tradition. We’re trying to get the right marriage.”

1 MSD buys Takeda biologics plant in Dunboyne
2 State’s biggest landlord records 30% rise in rental income
3 Irish tourism must also help itself to survive the pandemic
4 ‘Saudi Arabia is where the opportunities will happen in future’
5 Prosecutors suspect Wirecard was looted before collapse
6 What will the office market look like after the great remote working experiment?
7 Identigen founders make €12m each from sale of company
8 Refurbished Cafe en Seine doubled sales to €9.5m before pandemic
9 Trump signs executive orders banning TikTok and WeChat
10 Project Eagle: What was it and why is it in the news?
Real news has value SUBSCRIBE