McDonald’s says its net contribution to Irish economy is €196m 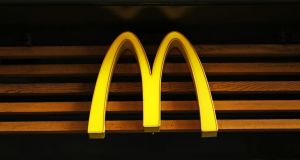 A McDonald’s logo over a restaurant in London. Photograph: Aaron Chown/PA Wire

Fast food chain McDonald’s has commissioned a report that says it contributes more than €196 million to the Irish economy in a year.

The restaurant group, which has 95 outlets in the Republic, hired consultancy Development Economics to assess its net economic impact, which includes staff wages, company profits and its contribution to the exchequer via taxes.

The findings are based on McDonald’s 2017 numbers for Ireland, the most recent data available to the researchers.

The report said the chain’s Irish restaurants, about 85 of which are run by a cohort of 22 franchisees, employ almost 6,000 staff. About 40 per cent of its workers here are under the age of 22, it added.

The chain sought to highlight the regional spread of its economic impact. Of the €196 million, the researchers found that €83.7 million of the output was generated in Dublin, €18.1 million in Cork, €10 million in Waterford, and €7 million in Limerick.

Beth Hart, the supply chain and sustainability director for McDonald’s in the UK and the Republic, said the chain “pumps prosperity” around the State.

“It’s important that we stop and reflect on our economic impact,” said Ms Hart. “When you look at the scale of it, you realise it is actually the size of our responsibility. The report is a tool to help us act responsibly.”