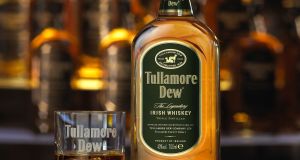 The makers of the Tullamore Dew Irish whiskey brand last year returned to profit after a surge in revenues.

However, a corporation tax bill of €2.52 million resulted in a post tax loss of €2.2 million.

The tax bill arose from €2 million in adjustments in respect of previous periods and a €472,000 charge as a result of “origination and reversal of timing differences”.

A note states that the adjustments relate to temporary timing differences arising from capital allowances.

According to the directors’ report “production volumes at Tullamore were higher than in the prior year, in part due to the first full year of grain production”.

On the outlook for its product, the directors said that “economic and market conditions are improving and the drivers of the premium spirits market are in alignment, demographic trends are positive, emerging economies continue to fuel the growth of middle classes who in turn seek out premium Irish whiskies”.

The profit last year takes account of non-cash depreciation costs of €7.1 million which was a sharp increase on the €4.2 million depreciation charge for 2017.

1 Moving in and out of lockdown is a recipe for economic disaster
2 UK tips into deepest recession on record after 20% contraction
3 ‘No demand... because there are no people’ at well-known Dublin pub
4 Stripe lures Dhivya Suryadevara from General Motors to be CFO
5 European markets rise despite UK recession
6 General Motors loses rising star after shock move to Stripe
7 Harvey Norman targets Irish property developers
8 Buying a second home now that we work from home
9 UK criticised for ‘unforced errors’ on post-Brexit trade deals
10 Irish agritech company MagGrow raises €6m in funding
Real news has value SUBSCRIBE