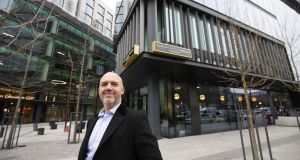 Dylan McGrath outside his restaurant Shelbourne Social in Ballsbridge.

McGrath’s success has resulted in the two companies employing a total of 179 people at the end of December last.

The chef has expanded his business with the opening of the 85-seater venue Shelbourne Social in Ballsbridge with his business partner Vincent Melinn, who is also involved in Fade Street Social and Rustic Stone ventures.

Numbers employed at Fade Street Social increased from 106 to 111 last year but they fell from 70 to 68 at Rustic Stone.